Subways of the World, United (at the same scale)

One of my favorite maps that I've covered here has been this map from radical cartography showing the mass transit systems of North America at the same scale. Recently, via Matt Yglesias, I came across a similar project: this one is by Neil Freeman and it shows subway systems from around the world at the same scale. Here are some of the subway systems he's got, though there are many others. 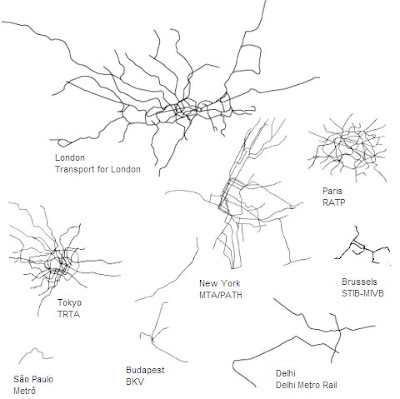 I - an American who detests the standard mode of American urban development of the last 60 years - tend to think of European cities as walkable utopias with comprehensive mass transit systems. I don't know if that's quite a fair judgment, but one thing you notice from these maps is that, other than New York City, there are very few American cities with a subway system that forms a dense web like Paris' or Madrid's. Even Washington, which has a very good subway system, is sort of spread out, and then it goes downhill from there. But a bunch of cities in Europe and Asia have very dense systems, and it seems that that's what you need to have truly comprehensive rail mass transit: the ability to walk to the nearest Metro stop, and then to get from pretty much any point in a city to pretty much any other point on the subway. You can do that in New York City; I don't know if you can do it in any other city in North America.
Posted by Chachy at 2:42 PM

The San Francisco graphic isn't very accurate because it combines the entire regional commuter train (only some of which is underground) with only the underground parts of the city's light rail system. SF has a lot more transit above ground than under.

Sao Paulo seems a bit sparse as well... there are few more lines see: http://en.wikipedia.org/wiki/S%C3%A3o_Paulo_Metro scoll down to see the map.

London's "subway" or Underground as it's known, predominantly serves north of the River Thames. To get a good idea of the full picture, you need to add in the many suburban "main line" rail services that cover both north and south of the river, and aren't on this map

You seem to have cut off most of Sao Paulo's network, showing only the isolated line 5 (connected to the rest of the network by commuter rail). The site you link shows more.

Erik: The San Francisco map shows all lines with dedicated rights-of-way. The outer sections of Muni Metro run in mixed traffic along the street, which makes them barely faster or more efficient than buses.

Regarding Paris, it shows indeed a very dense network in the city center (roughly a circle of 12km diameter), but transportation is sparse when you go to the suburbs and the Greater Paris area.

In my opinion, and for having been a user of more than 20 years of RATP and SNCF (Paris urban rail operators), I don't find Paris a good system. It is only good for those who are rich enough to live downtown. For the less well-off leaving in the suburbs, well, they have very poor access to the city, and thus the jobs.

Hi there, I found your website by means of Google while looking for a related topic, your web site got here up, it seems to be great. justin bieber fans

So, I don't actually suppose this may have success.

Thank you for the article, very useful piece of writing.