The New York Times has another one of their ridiculously information-rich maps which shows all of the 200,000+ facilities around the US that have pollution discharge permits, viewable by state: 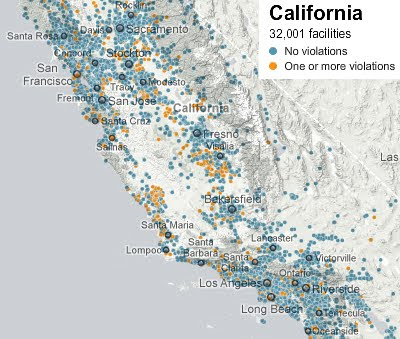 The orange dots are facilities that have been cited for violations, and you can mouse-over them to see who they are and how many times they've been cited.

All this information is thanks to the 1972 Clean Water Act. It makes you think: thank heavens for that progressive Nixon administration! If not for them, there'd be no Clean Water Act and no EPA. And given the paralysis of the political system these days, as the wealthy classes become ever more shameless about claiming their ever-larger slices of an ever-shrinking pie, even as a sense of social responsibility towards the society which allowed them to garner that wealth continues to erode, it seems very unlikely that political initiatives like that would be able to pass now.

An accompanying article starts off this way:

Jennifer Hall-Massey knows not to drink the tap water in her home near Charleston, W.Va. In fact, her entire family tries to avoid any contact with the water.

Her youngest son has scabs on his arms, legs and chest where the bathwater — polluted with lead, nickel and other heavy metals — caused painful rashes. Many of his brother’s teeth were capped to replace enamel that was eaten away.

Neighbors apply special lotions after showering because their skin burns. Tests show that their tap water contains arsenic, barium, lead, manganese and other chemicals at concentrations federal regulators say could contribute to cancer and damage the kidneys and nervous system.

“How can we get digital cable and Internet in our homes, but not clean water?” said Mrs. Hall-Massey, a senior accountant at one of the state’s largest banks.

Imagine if we didn't have the Clean Water Act.
Posted by Chachy at 12:22 PM

Either that, or the Republican party really has moved to the extreme right.

Oh, and you're right Chachy, no way it would pass now. But here's a little though experiment, suppose we decided that the constitution just wasn't keeping up with the times and we needed a new one. We could, in theory, call a new constitutional convention. Do you think that we could ever get a new constitution ratified? And what would it look like if we could?

I know - I think Nixon might have been the most liberal president we've had in the last 41 years (presently company maybe included, though the jury's still out).

I've wondered about the constitutional convention lately, mostly because, as Matt Yglesias keeps pointing out, the US Senate is a phenomenally unrepresentative institution that basically has no counterpart anywhere else in the free world that is skewed heavily against any sort of change being made on any front, which means - in a context in which elites are increasingly disengaged from their civic responsibilities and we face mounting crises on multiple fronts, including but not limited to the apparent fact that, after plateauing roughly since ca. 1973, living standards in the US since 2000 have actually shown signs of declining over a protracted time period - it would be real nice to do away with the Senate altogether. But it's really hard to image the country being able to come to a consensus about damn near anything these days, including (and especially) what fundamental principles of government we ought to adopt. E.g., what % of the population would vote in favor of a constitution drawn up on explioitly Biblical grounds? I'd put the over/under at 20% or so. That's a lot of people who would fundamentally be opposed to government on Enlightenment principles - and of course there would be many other factions as well. So it's hard for me to imagine how a successful con-con might unfold.

I hate the Polluter!

designed to.Shop for high quality wholesale efx bracelet products on DHgate and get worldwide delivery.
silly bandz are a brand of silicone rubber bands formed into shapes including animals, These colorful
silly bandzare made of silicone and die molded in many different

fun shapes. They come in all different shapes, like foods, letters and animalsand and so on.welcome to enjoy colorful silly bandz for free shipping.

Oh my god, there is really much helpful info here!