The World Trade Organization is up with a map of trade disputes among its members: 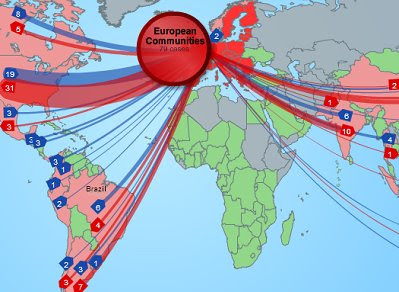 Back around the time that various liberals, indigenous peoples, anarchists, labor unions, and environmentalists were staging massive and unprecedented protests against this obscure group of bureacrats known as the WTO back in 1999 and 2000 in places like Seattle, I became interested in the organization, the issue of trade liberalization, and the motives of the people who were running the WTO. To make a very, very long story short, it seemed as if the WTO existed mainly to enforce the prerogatives of multinational corporations around the world, particularly in developing countries, by exerting dangerously powerful mandate through extremely opaque mechanisms. Transparency, as much as anything, is the cornerstone of democracy, and it was sorely lacking in the WTO at the time.

Of course like most nefarious schemes, the WTO probably wasn't so much a cabal of greedy evil-doers as a collection of individuals, swayed by the power of money to some degree that they didn't understand themselves, but not with generally bad intentions - indeed, with a likely sincere faith in the ability of free markets to raise the standards of living for people around the world. Which is not to say that the structure of the WTO wasn't essentially anti-democratic, nor that it sufficiently accommodated the interests of people who would be negatively affected by some of its decisions; those were problems for the organization, and as far as I know they continue to be, though I haven't really kept up with the issue in recent years (and the specter of a sort of corporatist black-helicopter supra-national hobgoblin of the left seems to have waned since the failure of the Doha round of trade talks). At any rate, this map certainly represents a more transparent WTO than existed back at the turn of the century, and hopefully it's been evolving in that direction.

Also, one thing you'll note about the map is that the vast majority of trade disputes involve the major rich trading powers, especially the US and EU. Most countries in Africa, for instance, aren't involved in any trade disputes at all.

Via Resource Shelf.
Posted by Chachy at 5:55 PM

I don’t know If I said it already, but this so good stuff keep up the good work. I read a lot of blogs on a daily basis and for the most part miss925.com just wanted to make a quick comment to say I’m glad I found your blog. Thanks.

There are actually cheap Coach Wallets for sale for this. Well we can say that you have grabbed the right pair of tattered jeans, the cool statement tee, and Coach Madison . To complete this, why not bring the most appropriate bag? Bags, Coach Gallery and totes do not only help you have an easy way to move when you are out but Coach Legacy do actually give more beauty to how you present you’re self.

The ED Hardy brand is known for its celebrity status and unique tattoo designs, so it is not surprising that so many people are sporting hardy shirt in order to stand apart from the crowd. As more and more consumers are interested in bold, colorful looks and edgy designs, ED Hardy Shoes find their place as an essential hardy shirt method of expressing the consumer's personality.

Trade Wars is the title, with some variations in spelling and capitalization,
dominical costa rica tours of a series of computer games dating back to the early days of personal computing. Based on influences from Star Trek, Star Wars, and early BBS strategy games, Trade Wars was an early example of the appeal of online games.
http://www.dominicalcostaricatours.com

I’ve seen progression in every post. Your newer posts are simply wonderful compared to your posts in the past. Keep up the good work

I consider every person should read this.

Based on influences from Star Trek, Star Wars, and early BBS strategy games, Trade Wars was an early example of the appeal of Gemscool.