Maps Can Save the World

Or make it a bit better, at least. The Economist has an article this week about using mapping tools for political advocacy. Here, for instance, is a map of Los Angeles that shows that areas with more parks (darker green) have lower rates of childhood obesity (smaller circles): 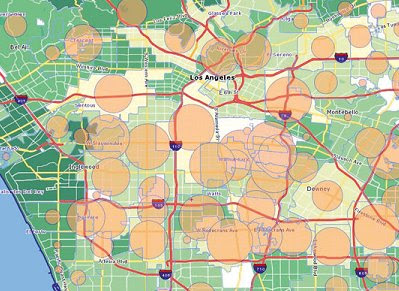 mapping technology has matured into a tool for social justice. Whether it is to promote health, safety, fair politics or a cleaner environment, foundations, non-profit groups and individuals around the world are finding that maps can help them make their case far more intuitively and effectively than speeches, policy papers or press releases.

“Today you are allowed to visualise data in ways you couldn’t even understand just a few years ago,” says Jeff Vining of Gartner, a consulting firm. Along with web-based resources, coalescence around more advanced tools has also helped, such as the emergence of ESRI, based in Redlands, California, as the market leader in mapping software. And the rise of open-source projects such as MapServer, PostGIS and GRASS GIS have made sophisticated mapping available to non-profit groups with limited resources.

I think what you've got here is another case where the proliferation of technology and information has a democratizing effect in that it allows people the means to form a clearer view of the world, and by extension a better understanding of how to redress injustices, improve their lives, or just become aware of opportunities which previously would have been obscure to them. New technologies don't always have such propitious effects, but this is one case where they do. Also note that maps are great.

I think that's all true but maps are also deceptive and often over-simplifying. More parks = less obesity sounds like a pretty awesome and actionable piece of intelligence. But it's just bad logic and one of no doubt dozens of such correlations that could be made. Those folks aint fat just for lack of swings. I agree that mapping is a poweful tool, but one of the reasons -no doubt - it's becoming so popular in social justice is that its easy to design a map to support your ends.

True! Information can be mis-represented. But if your conclusion is that more information just leads to more mis-representation, I'd say, yeah, that might literally be true, but on balance the more access to information people have the better. And using data to misrepresent facts is not unique to mapping, as I'm sure you're aware.

And to the extent that maps have the capacity to clarify certain facts and relationships, they ought to help clarify debate on issues related to those facts.

I mean, at the end of the day, if people just want to be misleading and obfuscatory, there's not much to stop them, maps or no. But if you look at the examples in this article, I don't think that's generally what people are trying to do.

I think, usually though, people aren't trying to mislead.

The new proliferation of maps is a wonderful thing. For a long time though, i think most people - myself for instance - have taken maps as truth. A truth of boundaries, a census truth, whatever. As maps are increasingly used in these new ways there is going to be a learning curve - in how to use them, but also in how to read them. It's a new kind of map literacy, one that examines the facts and variables and just plain logic of the thing. No different than what we do elsewhere, just learning to apply it to maps.

I think we've seen several times, maps originating from this blog spiraling out into the world. For both, the appeal was always what they "could" show and never what they "did" show.

The middle east was created with a map, look how that turned out.

But it's a good point. More maps = more need for map literacy.

thank you for sharing..

So, I do not actually consider this may have success.

Save the tigers, pandas,gorillas,owls,bugs,the world,etc.they have maps to save everything except the homeless and hungry, why is that?I think we should have a map to save all the people first, i am building a map where anybody in the world lacking basic needs to survive can put a polygon on the map so the rest of the world can see their needs and people or nonprofits with resources can put their location on the the map with a polygon so the people can find them.if you have any interest in this subject check out my site at saveallthepeopleyoufirst.com and tell me what you think .