Here's another one from the Library of Congress. This is a 19th Century Burmese Buddhist depiction of the universe. 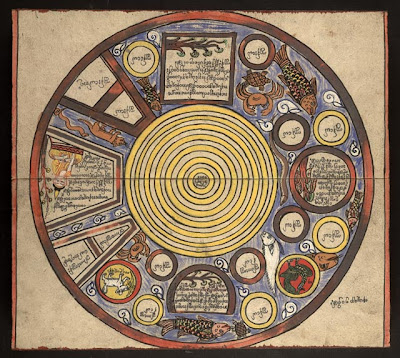 Interestingly, it shows the world as being constituted by the same sort of concentric ring-shaped continents and oceans as the Jain world map. But see those fish and turtles and other creatures around the terrestrial rings? Those represent a cosmic ocean, an element not present in the Jain depiction (though the Jains had some very particular opinions about the structure of the cosmos, to be sure).

It makes sense that there'd be some commonality between the geographies of the two religions, as many of the ideas of Buddhism derive from the same Indian metaphysical milieu. For instance, Buddhists also believed Mount Meru to be the center of the world, and as the axis at which the four major continents met. (By the way: yes, I am equivocating like crazy when I talk about "Buddhists" believing this or that; there are a bunch of major branches of the religion, some of which have been around for thousands of years, so it's not possible to speak of any one definitive Buddhist view of the world. But mostly I'm talking about early Buddhism, when it was still based primarily in India.)

But so anyway, here, from Wikipedia, is a description of the Buddhist view of Manusyaloka, "the world of humans and human-like beings who live on the surface of the earth":

The mountain-rings that engird Sumeru are surrounded by a vast ocean, which fills most of the world. The ocean is in turn surrounded by a circular mountain wall called Cakravāḍa (Pāli: Cakkavāḷa) which marks the horizontal limit of the world. In this ocean there are four continents which are, relatively speaking, small islands in it. Because of the immenseness of the ocean, they cannot be reached from each other by ordinary sailing vessels, although in the past, when the cakravartin kings ruled, communication between the continents was possible by means of the treasure called the cakraratna (Pāli cakkaratana), which a cakravartin and his retinue could use to fly through the air between the continents.

As in the Jain worldview, Jambudvipa is to the south of Mount Meru (or Sumeru) and is the home of regular old folks like us (or like Indians, at any rate). It's tough to tell from the map above which, if any, of the outer continents depicted are meant to be Jambudvipa. Here are the descriptions of the four continents, at any rate; draw your own conclusions about the map above.

o Jambudvīpa or Jambudīpa is located in the south and is the dwelling of ordinary human beings. It is said to be shaped "like a cart", or rather a blunt-nosed triangle with the point facing south. (This description probably echoes the shape of the coastline of southern India.) It is 10,000 yojanas in extent (Vibhajyavāda tradition) or has a perimeter of 6,000 yojanas (Sarvāstivāda tradition) to which can be added the southern coast of only 3 1⁄2 yojanas' length. The continent takes its name from a giant Jambu tree (Syzygium cumini), 100 yojanas tall, which grows in the middle of the continent. Every continent has one of these giant trees. All Buddhas appear in Jambudvīpa. The people here are five to six feet tall and their length of life varies between 80,000 and 10 years.

o Pūrvavideha or Pubbavideha is located in the east, and is shaped like a semicircle with the flat side pointing westward (i.e., towards Sumeru). It is 7,000 yojanas in extent (Vibhajyavāda tradition) or has a perimeter of 6,350 yojanas of which the flat side is 2,000 yojanas long (Sarvāstivāda tradition). Its tree is the acacia. The people here are about 12 feet (3.7 m) tall and they live for 250 years.

o Aparagodānīya or Aparagoyāna is located in the west, and is shaped like a circle with a circumference of about 7,500 yojanas (Sarvāstivāda tradition). The tree of this continent is a giant Kadamba tree. The human inhabitants of this continent do not live in houses but sleep on the ground. They are about 24 feet (7.3 m) tall and they live for 500 years.

o Uttarakuru is located in the north, and is shaped like a square. It has a perimter of 8,000 yojanas, being 2,000 yojanas on each side. This continent's tree is called a kalpavṛkṣa (Pāli: kapparukkha) or kalpa-tree, because it lasts for the entire kalpa. The inhabitants of Uttarakuru are said to be extraordinarily wealthy. They do not need to labor for a living, as their food grows by itself, and they have no private property. They have cities built in the air. They are about 48 feet (15 m) tall and live for 1,000 years, and they are under the protection of Vaiśravaṇa.

Bear in mind, though, that for all its specificity, this geography and cosmology is not meant as a literal description of the world as it appears to humans; rather, it was likey meant as a description of the way it appears to the "divine eye" through which a Buddha might perceive it. Or perhaps it was simply an allegorical description of the nature of the universe. Regardless, the Buddhist and Jain cosmologies are striking for the incredible scale on which their portrait of the universe is painted - and believe me, there are worlds upon worlds in those cosmologies beyond what I've briefly sketched here. The universe is much vaster and more incomprehensible in these accounts than it is in anything the West ever produced.

Until the 20th Century. See, that's the thing: with their fantastical descriptions and supererogatory scales of time and space, they've actually come much closer to the findings of modern science than anything in the Western tradition. That's not to say that they nailed it in every respect - they didn't foresee the organization of matter in the universe in the form of galaxies and galaxy clusters, for instance. But on this one profoundly significant fact, the ancient Indian cosmologies and modern astronomy agree: a human life is, by the temporal and spatial measure of the universe, a very, very small thing.
Posted by Chachy at 2:43 AM

This is the perfect blog for anyone who wants to know about this topic.

So, I don't actually suppose this may have success.

It always feels good to come back here and read the article. I love it..

I find it one of the best descriptions of 4 continents. thank you for sharing!