High-Speed Rail and the Economic Stimulus

Well, the US House's economic stimulus plan is out. I was hoping for a big investment in mass transit and rail to finally get the US moving towards something resembling a modern, balanced transportation infrastructure. So what does the plan offer?

· $10 billion for transit and rail to reduce traffic congestion and gas consumption.

Not great. And only $1.1 billion of that transit/rail money is for new projects. Of course, we don't know yet where in particular those funds are going, but it's clearly not sufficient to move towards a comprehensive plan like this one: 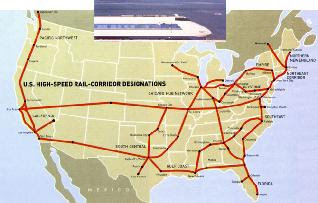 This is the plan of Andy Kunz, an urban designer and director of New Urbanism.org. The map shows planned routes for high-speed rail, and it really is like a win-win-win-win-win proposition. Consider that such a plan would:

- reduce our reliance on foreign oil
- help curb global warming
- provide tons of jobs, especially in places like the industrial midwest, Florida, and California, which have been hurt so badly hurt by the housing crisis and recession
- promote the development of an industry in the US where the country has fallen far behind the EU and Asian economic powers
- help prepare us for the era of peak oil.

There are, though, a couple of things I would change about this plan. First, I don't know that a Denver-Salt Lake City-San Francisco route makes a lot of sense. Those are some vast distances with really low population densities; I would substitute a regional line for the Colorado piedmont running from, say, Fort Collins down to Pueblo, and maybe even extending it down to El Paso. I would keep the southern route but I'd run it from San Antonio through El Paso. And I'd connect Houston to Austin.

Unfortunately, you get the sense that the US has sort of reached this point of inertia where we just can't make these sort of major investments to reshape our country anymore. It seems that our institutions have just become too ossified, our economic interests have become too established and enmeshed with the political power structure, and the public has become at once complacent and despairing - not liking the way things are, but also not caring enough to change them, or not feeling like they could change. In other words, it feels like we've entered a period of national decline in which these sorts of plans are untenable.

This could all change, of course. The malaise of the last couple of decades may prove to be a cyclical phenomenon. Maybe things will change again. Maybe the US will become a global leader at something other than financial trickery once more. But if it's going to happen, this $1 trillion economic stimulus - a once-in-a-generation opportunity to re-orient our priorities - would be an excellent place to start. And so far, the indications that we are going to do so are mixed, at best.

UPDATE: By the way, if you're wondering what a rising power investing in the future looks like:

In an amazing move towards converting their entire country towards sustainability, China is underway rebuilding its entire transportation system from the ground up. They now realize that cars and oil have no future. China is building an amazing 5,000 miles of brand new high speed trains comparable to the French TGV (200+ mph), all of which will be open for business in just 2 short years! In addition, China is building 36 brand new, full size metro systems - each to cover an entire city. The new Shanghai metro system will be the largest in the world when complete - larger than London's extensive system. China's massive, fast track green transportation construction project is unprecedented in the history of the world, and will completely transform China towards sustainability by drastically reducing their need for oil and cars.