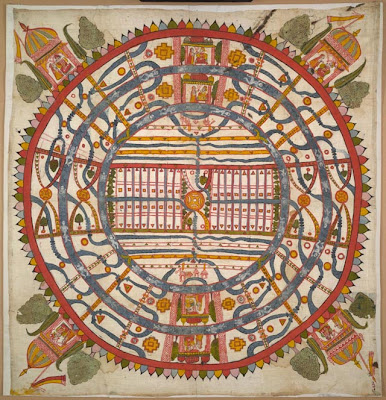 It's a Jaina portrayal of the world, from an exhibit at the Library of Congress. According to the exhibit's website

Jainism has its own version of geography and cosmology. This chart from the nineteenth century shows the world of human habitation as a central continent with mountain ranges and rivers, surrounded by a series of concentric oceans (with swimmers and fish) and ring-shaped continents.

Madhya Loka consists of at least eight continent-islands, arranged concentrically, each of which is surrounded by an ocean (typically with some sort of succulent name, like "Sugar Ocean" or "Ocean of Milk"); you can see those continent-rings clearly on this map (though why only two?). Humans live on Jambudvipa, the island at the center of the world; and at the center of Jambudvipa is Mount Meru, the highest point and center of the world. (According to trusty ol' Wikipedia, the quasi-mythical Mount Meru corresponds to the real world's Nagard Sarovar, in the middle of the Pamir Mountains.) At the summit of Mount Meru is Brahmapuri, the great city of Brahma, the god of creation.

From carbon dioxide emissions to eastern cosmology without so much as a segue. You see? You see why maps are so fun?
Posted by Chachy at 3:57 AM

This is fantastic. Thank you for posting this map!

I think that it is one of the most crazy things, for instance
Jainism has its own version of geography and cosmology right?? I can do a lot of things with this situation!

So, I do not really think this will work.

It always feels good to come back here and read the article. I love it..
stop pre ejaculation
home treatments for hemorrhoids
easy online business
No. 1 Natural Cure From Japan
Proven Natural Cure For Eyes

I think thi is amazing map. thank for ypur information.