Speaking of the Devil...

Dante's Divine Comedy is one of those classics I've been meaning to read for years and just haven't gotten around to. Likening the mild stickiness of the London tube to the allegorical cosmology of Inferno, the first part of The Divine Comedy, led me to look up the infamous nine circles that comprise that cosmology, and as it turns out, the London Underground is far worse than the first circle of hell! So is London, for that matter. 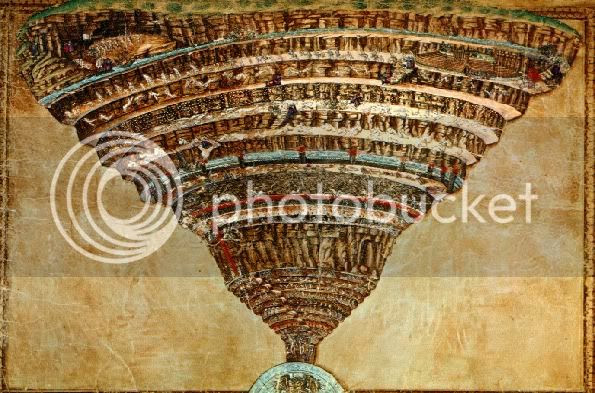 Here are descriptions of the nine circles, based on this tour of Dante's hell (with an assist from Wikipedia).

First Circle. Aka Limbo. The realm of non-sinners who don't get their Heaven ticket punched on account of being non-Christians. Includes green meadows and a nice castle - a sort of eternal retirement home for many of history's greatest poets and philosophers including Avicenna, Horace, Ovid, Aristotle, Socrates, Plato, Virgil and Homer. Sounds way, way cooler than Heaven itself.

Second Circle. Realm of the lustful - the "carnal sinners who subordinate reason to desire." Violent storms whip sinners' souls here to and fro. Some famous romantics ended up here, including Cleopatra, Dido, Achilles, and Helen.

Third Circle. A punishment for gluttons. Snowballs actually have a pretty decent chance here, as its inhabitants are forced to lie in a slushy mix of snow, hail, and freezing rain. Guarded by a three-headed dog.

Fourth Cirlce. Destination for the avaricious (though certain Christians might not realize their souls are headed here). Medievals saw this sin as "most offensive to the spirit of love." Actually, for Dante both the free-spenders and the tight-fisted would end up here, where they could annoy each other for all eternity.

Fifth Circle. A swampy place, and the realm of the angry, who take two forms: the wrathful (who express their anger), and the sullen (who repress it); the former spend eternity picking fights with each other, and the latter grumble and gurgle in a muddy bog. Beyond the fifth circle, the really heavy-duty hells begin, as the punished sins become more serious.

Sixth Circle. This hell reserved for heretics, who Dante defines as those who deny the immortality of the soul. They included epicureans, who saw the soul as mortal and enjoyed the boozin' and the feastin'. This circle also would seem to be more fun than Heaven, if not for the flaming tombs...

Seventh Circle. Getting into some serious damnation now... the seventh circle is for violent sinners - murderers, suiciders, blasphemers, userers, and sodomites. Those who commit violence against others are punished in a river of blood; those who do violence against themselves (suicides and "squanderers") are condemned to a horrid forest; a third region - a barren desert, torched by "flakes of fire" - is for those who commite violence against God.

Eighth Circle. Land of the fraudsters, including thieves, falsifiers, and specialists in fraudulent rhetoric, including "divisive individuals who sow scandal and discord." Presumably where Glenn Beck will find himself after the sad day he passes on. Punishments include being licked by flame and getting turned into a lizard.

Ninth Circle. The helliest hell of all and the realm of the worst of the worst: traitors. Like the third circle, it's a cold place, as the sinners in the ninth circle are entombed in ice at least up to their necks. Certain folks here like to gnaw on each other's heads. Satan is at the very center of this circle, waist-deep in ice, perpetually weeping, and munching on traitors (Brutus and Cassius in particular - one for each of his mouths).

Here's another map of Dante's hell - not quite as artful as Botticelli's version, but sort of mappier.
Posted by Chachy at 9:48 PM

I've given you an award.

Thanks, Matt! Now I may just have to do another post one of these days...

very appealing drawing you posted on this blog entry, when I just saw the picture I immediately remembered Dante's Divine Comedy and the drawing is pretty accurate!

I never have the chance to read a so extensive resume about the Dante's inferno vision, what a terrible place is the hell according to this men, I think that if I gonna fall in one of this will be the hell to greedy people.
Generic Viagra Buy Viagra.

i really enjoyed read this.

I never thought that it was this simple after all.

well, this is really impressive thing!! When I saw it for the first time, A was really shocked!! grandiose!!

Gosh, there's a great deal of helpful data in this post!