The Rocky Mountain Institute has produced an oil map webtool that lets you see how oil imports to the US have evolved since 1973. 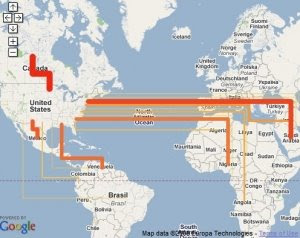 You can also track the amounts spent on oil imports over time, and the dollar amounts of oil being imported from individual countries.

One thing this tool makes abundantly clear is how different the last few years' run-up in oil prices was. Prices spiked during the first and second oil crises - ca. 1973 and 1979, respectively. But in both cases, the price surge was a direct result of a decrease in supply. The last few years, however, saw prices spike higher than they'd ever been, even though supply remained roughly constant. How could this be?

Some blame speculation in the oil markets. But if this was the case, supplier countries ought to have responded to the surging prices by increasing exports - something they failed to do until prices got really astronomical last summer.

I think a more likely explanation is that the past few years have seen global demand butting up against the geological limitations on global supply. This is more commonly known as the phenomenon of peak oil. Supply limitations are the only way to countenance flat exports in the face of soaring prices.

Of course, prices collapsed last year after two things happened: OPEC finally increased production a smidge, and (more importantly) the global economy took a long walk on a short pier, causing demand to crash. So the pressure on global oil supplies has eased - for now. We'll have to see what happens when the economic picture gets rosier again. If oil prices again quickly begin to spike, we'll have a good indication that the era of peak oil has arrived.
Posted by Chachy at 12:03 PM