Mood Map of the United States

Via the Southern Political Report, this map, based on data from a telephone survey performed by the Centers for Disease Control, shows percentages of residents who reported more than 14 days of emotional discomfort, including "stress, depression and problems with emotion" over the prior month. 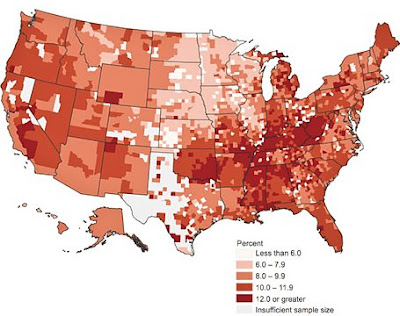 Appalachia has problems. Kentucky is the saddest state, with 14.4% reporting extended periods of mental discomfort, and a depression belt stretches right through the entire Upland South region from West Virginia to Oklahoma. This corresponds to a region with some of the highest rates of neuroticism, as well as some of the lowest rates of overall well-being.

At the other end of the spectrum, the most content states are Wisconsin, Iowa, Nebraska, and - happiest of all, for utterly inexplicable reasons - Hawaii. All of those states had fewer than 8% report sustained mental distress.

What strikes me about this map is that urban and suburban counties generally seem to rate consistently toward the middle of the mood spectrum throughout different regions of the country (albeit with a few exceptions, like Los Angeles, Detroit and Tampa). But rural areas vary dramatically - the happiest counties are rural areas of the Upper Midwest, and the saddest counties are, again, rural areas of the Upland South. So what accounts for the discrepancy? Well, broadly speaking, National Geographic says this:

Previous studies have linked regional income and education levels to well-being. And in general, people with higher incomes and college degrees report fewer instances of prolonged depression or stress, said study author Matthew Zack, a medical epidemiologist with the CDC.

But that's probably not the whole story, he added.

For example, communities with low [frequent mental distress] levels may have above-average support structures for residents—subsidized health clinics, for example, or job-retraining programs.

"There may be different influences in different communities," Zack said. "Once we find out what the most important ones are, we may be able to develop programs to reduce the levels of mental distress."

So are such support structures much more prevalent in places like the rural Midwest than in Appalachia? And if so, why? And what accounts for some of the intra-regional differences, like the fact that people in the Appalachian counties of Tennessee and North Carolina seem to be happier than their counterparts in Kentucky and Virginia? And why is it that Oklahoma is not just very sad, but appears to taint neighboring regions in other states? Lots of intriguing questions here.

This study will be published in the June 2009 issue of the American Journal of Preventive Medicine.
Posted by Chachy at 2:33 PM

You're probably being facetious, since if I lived in Hawaii, I'd be pretty damn happy too.

People in Minnesota won't admit they are not happy. People in the south will be pretty up front about it. I've lived in both MN and TN. Interesting, but I don't know how you can do a rational study of this.

Matching this map with a map of the most obese states in America, they are significantly similar. Since Depression is linked to diet and exercise, a free health clinic wouldn't help as much as a free gym would.

I've bookmarked this page for future reference, thanks..... :)

Pretty good post. I just stumbled upon your blog and wanted to say that I have really enjoyed reading your blog posts. Any way I'll be subscribing to your feed and I hope you post again soon

This is a really good read for me, Must admit that you are one of the best bloggers I ever saw.Thanks for posting this informative article.

Thanks for the article, this site really enriches me ...

Thanks to search engines because it has led me to this good website ...

Would you mind if I use some of the info here, and I'll leave a link back to you

I found your website perfect for my needs. It contains wonderful and helpful posts. I have read most of them and got a lot from them. To me, you are doing the great work. Carry on this. work at home In the end, I would like to thank you for making such a nice website.

Hello, I just stopped by your blog and wanted to say hi. I noticed You have a lot of really great content here, I’ll be back soon, thanks a lot for posting!

Thanks for taking the time to discuss this, I feel strongly about information and love learning more on this. If possible, as you gain expertise, It is extremely helpful for me. would you mind updating your blog with more information

Many thanks for posting this, It?s simply what
I was researching for on bing. I?d a lot relatively hear
opinions from an individual, barely than
a company web web page, that?s why I like blogs so significantly. Many thanks!

I’d come to accede with you here.
Which is not something I typically do!
I love reading a post that will make people think.
Also, thanks for allowing me to speak my mind!

Comfortably, the news post is during truthfulness a hottest
on this subject well known subject matter. I agree with ones
conclusions and often will desperately look ahead to your updates .
Saying thanks a lot will not just be sufficient,
for ones wonderful ability in your producing.
I will immediately grab ones own feed to stay
knowledgeable from any sort of update versions.
get the Work done and much success with yourbusiness results!

I am more than happy to discover your website.
I had to thank you for writing this excellent read!
I’m definitely loving every bit of it and I’ve bookmarked the site
to come back for new information you write-up on your website.

Good luck obtaining people behind this one
Although you make some Very fascinating points,
youre going to need to do more than bring up a few issues
that may be different than what weve already heard.
What are attempting to say here? What do you need us to believe?
It seems like you cant truly get behind a unique thought.
Anyway, thats just my opinion.

It won't truly have success, I believe this way.

Nice information bro... That is a good post. cerita sex

panic away review With havin so much content do you ever run into any issues of plagorism or copyright violation? My blog has a lot of exclusive content yeast infection no more I've either created myself or outsourced but it seems a lot of it is popping it up all over the web without my authorization. Do you know any solutions to help reduce content from being ripped off? I'd certainly appreciate it. panic away review

back to nature said...