Remember how last week we were all going to die because of swine flu? And but now it looks like it just gives you a case of the sniffles? The media does seem to have a difficult time calibrating its coverage of these sorts of issues, doesn't it? Well, fortunately there are people still following the spread of the flu who actually know what they're talking about - people like Dr. Henry Niman, who made this google map of the flu and who has now set up shop with a new and fancier map. 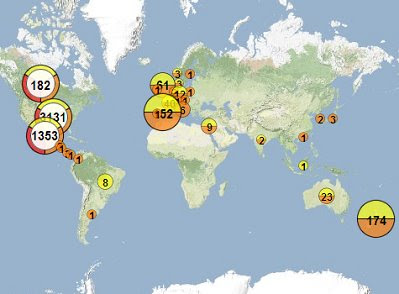 It has numbers of suspected, confirmed and fatal cases for every country, and the data seems to be a bit ahead of other sources. E.g., who knew New Zealand had 174 cases? You can zoom in to see the spread of the virus within countries, too, like yea: 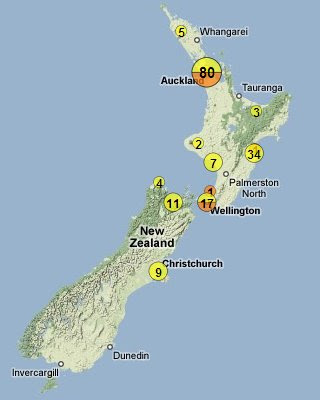 There are other maps as well, like this one of the spread of swine flu in the US by county. Blue counties have had 1-5 cases; greens have had 6-15; yellows have had 16-40; and reds have had more than 40: 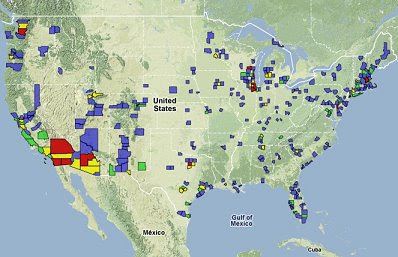 Hmm. It seems to be much more widespread in the US now than it is in Mexico. Maybe we ought to close the border and keep the dirty Americans from infecting their neighbors to the south.
Posted by Chachy at 11:54 AM

Really you have done great job,There are may person searching about that now they will find enough resources by your post.I like this blog..
Blogger how when you visit my site,
My Site created for men's health,
Here the best method for you and get the best Penis Enlargement Pills today.

You definitely put a new spin on a subject thats been written about for years. Great stuff, just great!

Swine flu will always exist no matter what happens.

You can zoom in to see the spread of the virus within countries...

This is really alarming that swine flue still exists in some part of this world. We all should be careful about it.

Social awareness should be increased for remove this.Unless there will be problem in the future.

It does help me a lot knowing that you have shared this information here freely. HCG Blue Drops allow your body to burn the fat for energy instead of the food you would typically consume.

United States is clustered into a few geographic centers, a strikingly different pattern than the map of all farms.

The map scroll method helps to find out the places.It s effectiveness is really great.

I thing swine flu would never disappear, and the best people can do is to protect better against it!

Good information here. I really enjoy reading them every day. I’ve learned a lot from them.Thanks so much for sharing this information. Greatly help me being a newbie.

It is great to know that you are providing classes for students in flute. This is a great opportunity for students to learn flute. Thanks for sharing this with us and keep posting more updates regarding this in your blog.

The connections that you make early in your career will take you far. After 20 years it is still true for me. This has been true regarding companies I worked for and those I worked with. All you have written is excellent advice.

Great Information sharing .. I am very happy to read this article .. thanks for giving us go through info.Fantastic nice. I appreciate this post.

You have shared amazing collection of different recipes. I love cooking and spend my extra time to make new one. I'm glad to find this website. keep it up.

I can only express a word of thanks. Because with the content on this blog I can add knowledge I, thank has been sharing this information. Do not forget to visit our website to share information and knowledge about health. |
menghilangkan TB Kelenjar |
Obat Tb kelenjar Di Apotik
Solusi Pengobatan Alami paling ampuh |
Obat Kista Herbal terbaik