Organic Farms in the US

Via The Map Room, The New York Times maps organic farms in the US. 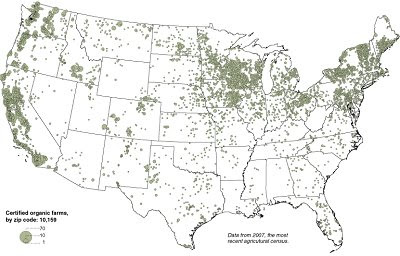 For comparison, the Times also has a map showing the locations of all farms in the US: 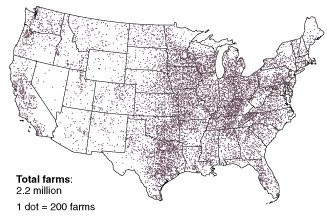 The map of organic farms in the United States is clustered into a few geographic centers, a strikingly different pattern than the map of all farms, which spreads densely over many regions, breaking only for the Rockies and Western deserts [sic].

Areas in the Northeast and Northwest have many small organic farms that sell produce directly to consumers. Large organic farms, which some call organic agribusiness, have flourished in California.

I leave it to the reader to decide if there's a significant correlation between the map of organic farms and this map.
Posted by Chachy at 11:38 AM

There is a clear pattern of more support for Obama translates to more organic farms...except in New York state where you have the exact opposite pattern.

Really you have done great job,There are may person searching about that now they will find enough resources by your post.I like this blog..
Blogger how when you visit my site,
My Site created for men's health,
Here the best method for you and get the best Penis Enlargement Pills today.

Organic Farms indeed does worsen the environmental condition a lot.

I would love to track your future posts pertaining to the said topic we are able to read.

This is interesting to know something new. I am really grateful to you for sharing these information.

Large organic farms, which some call organic agribusiness, have flourished in California

In the Northeast an Northwest there are small organic farms that sell produce directly.This will be a verifying fact.

I don’t think the time period “lurker” is very flattering to a non-posting reader. HCG Blue Drops allow your body to burn the fat for energy instead of the food you would typically consume.

I seriously think that the amount of farms is really less seeing the size of the country.

United States is clustered into a few geographic centers, a strikingly different pattern than the map of all farms...

The map scroll method helps to find out the places.It s effectiveness is really great.

I see that you are very well informed about your articles and i'll try to convince more and more people to read your blog. Nice job man!