Andrew C. Revkin points to a UN study on the risk of death from natural disasters around the globe. This is from a map based on the study: 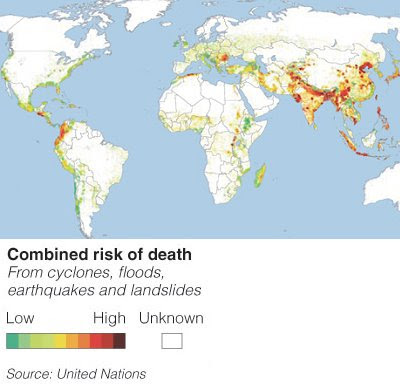 Some experts on disaster preparation aren’t happy with some aspects of the report, and many feel there’s little substance behind international pledges to cut risks. But many told me this report is still a helpful window on the outsize vulnerability of a few places on the planet where the costs of calamity are highest. A prime factor contributing to increased vulnerability is urbanization, with about one billion people already crammed into what are euphemistically called “informal” settlements in and around cities, better known as slums, and 25 million more moving in each year. These communities are usually built on steep slopes, floodplains or other vulnerable spots. Another is ecological damage, like the loss of mangroves in Myanmar that appears to have allowed the flood surge there to propagate inland more readily. The report projects that human-caused climate change will progressively tip the odds toward more trouble. But it stresses that increasing resilience to disasters can help limit climate risks, as well, even as it reduces poverty and potentially boosts global security.

The 200-page report has a bounty of maps. Here's one of drought frequency: 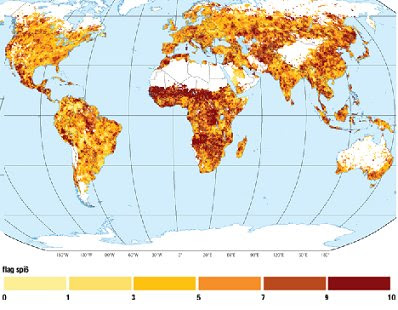 And here's a detail from a map on fire danger: 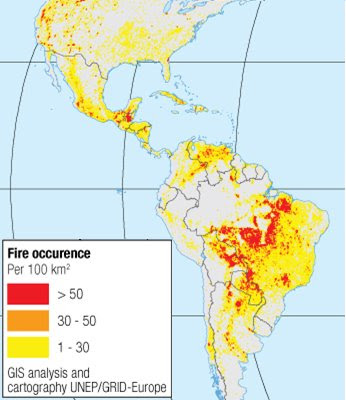 There's lots more there, if browsing through UN-issued PDF reports is your kind of thing. They also have a mapping tool, with which you can zoom in on the risks for individual countries.
Posted by Chachy at 11:09 AM

Hey congratulations! I saw your HDI maps linked on the Economix blog of the NY Times. I was reading and thought... this looks familiar... and sure enough, there you were, along with the HDI maps. Keep posting good stuff!

Thanks, Ben! Though it doesn't come without its burden... see above.

I discovered this after reading your article, thanks

Hello I want to congratulate to them by its site of the Web of the excellent looks like entertained and very good very to me it elaborated. I invite them to that they explore a little on my Web site.

It's no wonder that the map shows terrible disaster to happen in the future of the earth as the global warming is causing havocs all around.

Hello.. Firstly I would like to send greetings to all readers. After this, I recognize the content so interesting about this article. For me personally I liked all the information. I would like to know of cases like this more often. In my personal experience I might mention a book called Green Parks Costa Rica in this book that I mentioned have very interesting topics, and also you have much to do with the main theme of this article.

Locate not in how with the aim of accomplish a reverse phone lookup phone lookup otherwise a mobile phone search or else even a telephone number search search with the purpose of stumble on elsewhere who is down to facilitate character to has been calling you this full instance ok.

Wow, there is really much useful data here!

the map about drought is wrong (Sardinia and Corsica haven't problems of drought)!!!

Your work inspire me. Congradulation

I have checked this link this is really important for the people to get benefit from.Northern Virginia Mold Inspection

Way cool some valid points! I am grateful for you making this post on hand; the rest of this website is also first-class. Have a great fun.payday lender

Hey to everyone, it’s my first visit of the blog site; this blog includes awesome and actually best info for the visitors.payday loan with savings account

Thanks to have a great blog, everyone will be in love with this blog writing surely because it has quality stuff. auto insurance

Nice answers in replace of the question with real point of view and explaining about that.landscaping Coon Rapids MN

I am surprised why other specialized don’t perceive your site I’m greatly cheerful I discovered this.Businessman Mark Curry