Capital Punishment Around the World

While we're on the topic of law and order and international norms, here's a map from the Criminal Justice blog at change.org on capital punishment policies around the world. 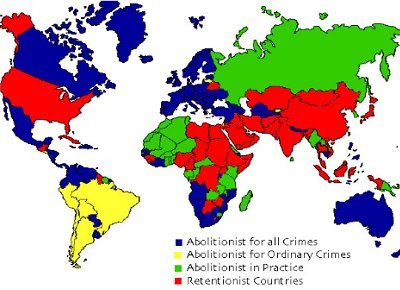 According to the blog entry by Matt Kelley, the top five countries for executions in 2007 were China (470 executions), Iran (317), Saudi Arabia (143), Pakistan (135), and the United States (42). (Kelley notes that China likely underreported executions.)

There are some clear geographical patterns here. Basically, capital punishment has been completely delegitimized in Europe, and to a slightly lesser extent in Latin America. It is still fairly healthy, if that is the word for it, in most of the Muslim world and East Asia, however.

And then there is the United States. This is one of those issues where the US really stands out as culturally and socially distinct from other Western countries. No other European country (save for the dictatorial regime in Belarus), nor any other Anglophone country, practices capital punishment. In this case, the US has more in common with the traditionalist societies of the Middle East and Asia, which tend to have a more authoritarian character at the societal level.
Posted by Chachy at 5:14 PM

"...nor any other Anglophone country, practices capital punishment."

Zimbabwe, Botswana, and Lesotho, according to the map, practice capital punishment and all have English as one of their official languages.

And several other African and south Asian countries, as well, including India and Pakistan. But I had in mind the countries where English is the primary language: the UK, Ireland, Canada, the US, Australia, and New Zealand, and maybe South Africa. Your use of the term is probably more precise though. (Is there a better term for the countries where English is the primary and most common language?)

Anglosphere is used as well, and is probably a better term. I think -phone implies language and -sphere implies shared cultural heritage.

Maybe I shall have to invent a word. Anglolingual? Angloquacious?

It really appeals to me this link about capital punishment. I wonder sometimes how many criminals have been killed since this penalty exist.

Interesting comparison between ranching states (WY and MT) and farming states (SD and ND adjacent). Also interesting is fall-off of non-believers moving west across the northern plains, from WI to MN to ND, despite similar ethnic background.

To my mind everybody have to glance at this.

An impressive share, I just given this onto a colleague who was doing a little analysis on this. And he in fact bought me breakfast because I found it for him.. smile. So let me reword that: Thnx for the treat! But yeah Thnkx for spending the time to discuss this, I feel strongly about it and love reading more on this topic. If possible, as you become expertise, would you mind updating your blog with more details? It is highly helpful for me. Big thumb up for this blog post!
cara menghilangkan kutil
obat kutil kelamin manjur

There are certainly a lot of details like that to take into consideration. That is a great point to bring up. I offer the thoughts above as general inspiration but clearly there are questions like the one you bring up where the most important thing will be working in honest good faith. I don?t know if best practices have emerged around things like that, but I am sure that your job is clearly identified as a fair game. Both boys and girls feel the impact of just a moment’s pleasure, for the rest of their lives.
jual obat gonore/kencing nanah
cara mengobati sipilis dengan obat alami
cara cepat menghilangkan kutil
jual obat raja singa

This article is unique and interesting. thanks for your share. I have been meaning to write something like this on my website and you have given me an idea.
obat herbal manjur untuk penyakit wasir atau ambeien
cara mempersempit vagina setalah melahirkan
obat herpes herbal

This article is unique and interesting. thanks for your share. I have been meaning to write something like this on my website and you have given me an idea.
mengobati kutil kelamin pada pria
obat herbal alternatif untuk raja singa

I’m impressed, I must say. Really rarely do I encounter a blog that’s both educative and entertaining, and let me tell you, you have hit the nail on the head. Your idea is outstanding; the issue is something that not enough people are speaking intelligently about. I am very happy that I stumbled across this in my search for something relating to this.
konsultasi dokter kelamin online
obat herbal untuk gonore
bagaimana cara mengobati kencing keluar cairan seperti nanah
cara cepat mengobati kutil kelamin

This article is unique and interesting. thanks for your share. I have been meaning to write something like this on my website and you have given me an idea.
mengobati kutil kelamin tanpa operasi
obat alternatif untuk penyakit kutil kelamin
obat kutil kelamin yang sudah terbukti manjur
obat herbal untuk kanker


This is the right blog for anyone who wants to find out about this topic. You realize so much its almost hard to argue with you (not that I actually would want…HaHa). You definitely put a new spin on a topic thats been written about for years. Great stuff, just great!
jual obat kencing nanah di jakarta
jual obat herbal untuk penyakit kanker payudara
jual obat herbal untuk kutil kelamin
cara mengobati kutil kelamin dengan cepat
dimana bisa beli obat untuk penyakit jengger

articles that are very good and for the future I hope your article more useful thanks again.
gadispoker