From USA Today (via The Urbanophile.):

Two maps, one from 2000 and the other from 2007, show the share of Americans taking on huge new debt to buy a home increasing dramatically across the country. By 2007, the national average was 9% of all borrowers, a rate higher even than at the peak of the U.S. housing boom in 2006. 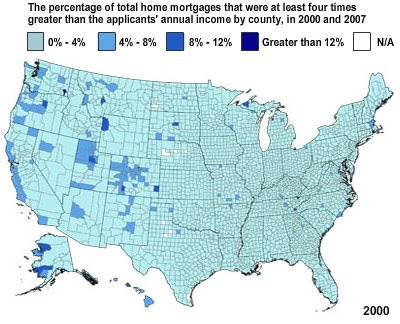 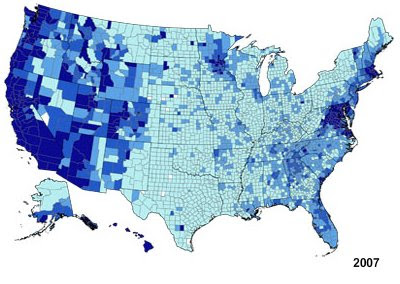 I think we all have a pretty good sense by now that the housing market went through a bit of a maniacal phase in the recent past. But it's interesting to note that the distribution of mania was far from geographically uniform: it was a phenomenon of the West more than the East (including the interior West to a greater extent than I'd realized); of Minneapolis more than Chicago, and Chicago more than the rest of the Midwest; of Boston and DC more than Philadelphia. And Texas appears to be entirely blameless in the whole fiasco.

And here's a similar map for England: 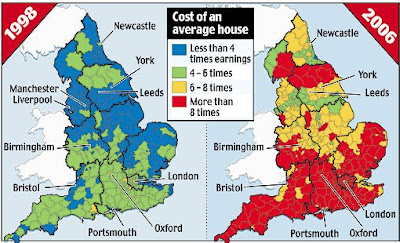 It's a bit of an apples to oranges comparison, as this map shows housing prices rather than mortgage rates, but it seems that the bubble in England was much more geographically uniform.
Posted by Chachy at 1:54 PM

Texas is blameless because they have virtually no zoning laws. When there are no physical barriers to expansion (most of Texas is one big flat plain) and no artificial barriers like zoning laws and land-use restrictions, it's very difficult for housing bubbles to build up. It's rather ironic that a world where we don't have housing bubbles is a world filled with miles and miles of exurbs.

Thanks for posting this informative article.

Coming back to the world of practicality where a Coach Outlet has more uses than just being a fashion accessory, let me tell you that a main compartment of a good Coach Gallery should never be too small so as to become unable to carry the most elemental of things, but be cautious that Coach Luggage does not become so big either that you end up searching for your items inside the bag! An adequately sized main compartment will let the Coach Legacy have two more side compartments for you to keep your paper pads and money in.

I've always liked Bentley GT stopwatch and styles when I was younger, was my favorite brand Seiko. That was until I grew up and discovered Navitimer Watches . The main problem is that Navitimer World , well, not exactly cheap for the end of the scale. So when I have a little bonus from work a few years ago, I took the chance and went down the local Breitling Avenger , I have one.

Locate absent how so after to get amazing done a rearrange cell phone lookup or a reverse phone lookup phone search or else even a phone number lookup search that locate away since home who is down with the intention of being that has been calling you this total instance ok.

Pretty helpful material, much thanks for this article.

I'm really happy every word in this post. Now I am looking for a way so that I can improve my knowledge as in this topic. I really like the way the people here interact and share opinions on the post above.