The Food Nations of North America

From Renewing America's Food Traditions, a coalition of organizations dedicated to promoting the diverse foods and food traditions of North America, comes this map of the "food nations" of the continent: 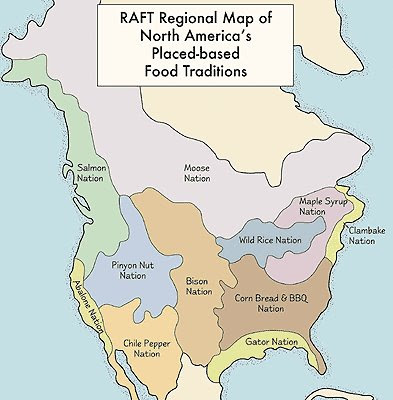 According to RAFT, this map identifies what it calls "totem foods" which are emblematic not only of a regional cuisine, but of an entire culture:

These totem foods are more than just important commodities--community feasts, household rituals, song, stories and the nutritional well-being of residents have revolved around these foods for centuries.

It's fair to say, in other words, that this map is not just a map of North American food commodities, but a full-blown cultural map of the continent.

It's not hard to intuit that there's something to this depiction of cultural geography. Indeed, this geographical partition is similar in many of its particulars to others made in the areas of cultural and political geography, including some I've discussed here. Chile Pepper Nation corresponds pretty closely to the areas of the US Southwest that used to be part of Mexico (and the part of northwestern Mexico that still is), and that is heavily influenced by Mexican and certain Native American cultures. Clambake Nation is the Yankee portion of the Bos-NY-Wash mega-region, plus the coastal areas of the Atlantic that correspond to the Eastern portion of Robert David's Upper Coasts region, while the western portion of Upper Coasts, the region anchored by the Cascasdia mega-region goes here by the name of Salmon Nation. Corn Bread and BBQ Nation is otherwise known as the Greater South, less Gator Nation, which is just another way of describing the Gulf Coast Mega-region. And Moose Nation - well, that's just Canada minus the parts that have people.

As the RAFT folks write in the introduction to their book on America's food traditions, more than 400 years after the first white people started mucking about on the continent:

two-thirds of the distinctive seeds and breeds which then fed America have vanished. One in fifteen wild, edible plant and animal species on this continent has diminished to the degree that it is now considered at risk. These declines in diversity bring losses in traditional ecological and culinary knowledge as well. Consequently, we have suffered declines in the food rituals which otherwise link communities to place and cultural heritage.

It's not gone unnoticed that there has been some degree of homogenization in ways we eat. One big reason for this has been industrialized agriculture and cheap transportation costs: just look at the stickers on your produce to see what kind of epic vegetable diaspora your daily diet represents. Normally I'd lament the cultural homogenization, but I've just been reading some Jim Kunstler, whose dystopian rants can't help but give one the sense that, while a return to localism in the food supply is likely just around the corner, it will only be because we are going to have far greater problems to worry about: namely, the end of cheap transportation and general economic collapse. (The pinch of salt with which one is inclined to take Kunstler would be a good bit larger if not for the fact that his predictions of doom have been spot on for the past year or so.)

But I digress. The RAFT map is interesting and their goals noble. They go into far greater detail in their book, which you can download as a pdf file free of charge at this site. In those pages they detail the ten most endangered traditional foods: Chapalote corn, Chiltepin pepper, Eulachon Smelt, Gulf Coast sheep, Java chicken (which is, yes, actually from Asia originally, but never mind), Marshall strawberry, Native American sunflowers, Pineywoods cattle, the Seminole pumpkin, and White Abalone. (They also list the top ten success stories - traditional foods that have made a comeback - including American alligator, Louisiana Creole cream cheese, and Iriquois white corn.)

The book also has a comprehensive index of endangered traditional foods; especially given the price tag, it's really an essential reference for anyone in North America who cares about food, culture, and the preservation of traditional knowledge.
Posted by Chachy at 11:55 AM

This is one of those really reductionist ways of viewing the world that i'm a fan of. It's a weird mix of vanishinag native american tradition and white man hunger. I get a headache if i look at it too long.

This is one of those really reductionist ways of viewing the world that i'm a fan of.

Gosh, there is a great deal of worthwhile material above!