On the Other Hand, We Did Already Save the World Once...

All right, so that last post was a bit of a downer. Here's some news of a more upbeat nature, from Science Blogs: we've saved the ozone layer. Some researchers

ran two scenarios in the same climate model, and charted the evolution of stratospheric ozone in each. The first model was based on the current (low) emissions of ozone-destroying chemicals resulting from the implementation of the Montreal Protocol; in the second, rather poetically named "world avoided" model, CFC emissions increase by 3% a year ("business as usual") after 1974, when the ozone alarm was first sounded (and was presumably ignored in this parallel universe).

Their results are published in Atmospheric Chemistry and Physics. This is what they found:

In this animation, put together by the NASA/Goddard Space Flight Center Scientific Visualization Studio, reds denote high concentrations of stratospheric ozone; blues denote lower concentrations. The Earth on the right is what would have happened if the Montreal Protocol, which banned CFCs, had not been signed. By the middle of this century, the difference is pretty shocking, as you can see in these images captured by Chris Rowan: 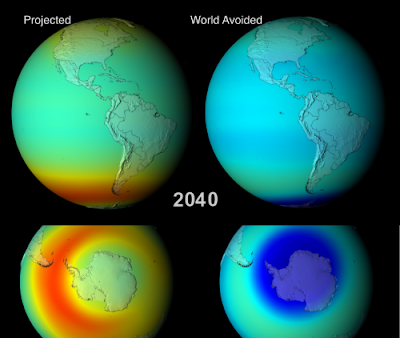 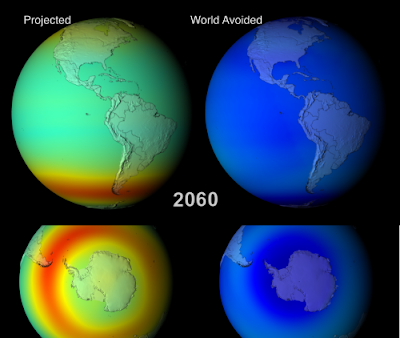 So, no future of dressing our children in astronaut suits to walk a scalded earth. That's one dystopia avoided; only a few more to go...
Posted by Chachy at 11:43 AM

For my part everybody ought to glance at this.

very nice article, interesting and easy to understand, this may be the first step to your success.
Keep posting and updating information or other article,,