"Paper Cuts": The Death of the Newspaper Industry

Paper Cuts is tracking the ongoing labor carnage in the newspaper industry in the US. They've got an interactive map with details on newsroom job losses around the country. 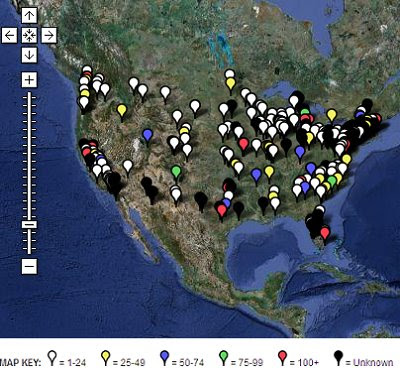 The South Florida Sun Sentinel. The Rockingham News. The Washington Post. The Pocono Record. The Atlanta Journal-Constitution. These are only some of the papers that have announced layoffs just since Saturday. The combination of the wan economy and the outmoded business model of newspapers has meant disaster for this industry. It looks increasingly like US newspapers in their present form may not be long for this world.

But is that such a bad thing? It would certainly be a terrible thing if journalism didn't survive. But there's surely no chance of that happening - there will always be a demand for journalism. In the future, though, it's likely to be hosted by media other than cheap, inky paper delivered in a bundle to your doorstep. The web is the obvious new venue for journalistic content, and that medium's been growing for years now, of course. But the real interesting test for the future of journalism will be what happens when a major city finds itself without any major newspaper. What will fill the void? My guess is: a proliferation of publications, especially online but in print as well, focused on much narrower niches. This, of course, has been the trend on the internet - the proliferation of micro-focused content venues (ahem) with little or no overheard costs, often motivated by individuals' passions rather than profit. The upshot has been that there's an incredibly richer array of content available to consumers now than there was ten years ago, even as newspapers have declined. (I've just been surfing around for information on Houston's light rail plans, for instance, and I've found way more information than I ever could have by simply waiting around for the paper to show up every day.)

This is the way media content is produced now, and in this context newspapers (like network television) are an anomaly: they offer breadth, not depth, as they rely on serving the interests of a mass audience. But there's nothing especially natural about combining news with sports scores, book reviews, classified ads, real estate listings, comics and all the rest of it, like a typical big-city paper does. The only reason to do so is if the medium that is best suited to distribute lots of information quickly and cheaply does not allow the consumer to exert selective control over content - then an editor has to decide what will appeal to the greatest audience, and deliver it all together in a big bundle. That was the best system for quick and thorough information dispersal during the 20th Century, but it no longer is.

The fact that this anachronistic and quirky medium is unlikely to last much longer in its present form doesn't, as I said, mean the end of journalism. But the questions are, over the long term: will journalism (of the 'serious' investigative sort) become a non-profit enterprise? And are we likely to suffer in the short-term from a lack of established journalistic institutions to act as a watchdog against corporations and government? But of course, for everyone in the industry who are currently suffering from the turbulence of economic and technological change, the questions are much more immediate and personal.

UPDATE: For an interesting and much more comprehensive expression of this general line of thinking, see Steven Berlin Johnson.
Posted by Chachy at 9:21 AM

I'm not sure the outlook is that rosy just yet. Unfortunately many newspapers do have "depth" even it often doesn't seem it. It takes an immense amount of background knowledge not to mention hard-to-get sources that your average blogger couldn't dream of to unravel many of the stories that appear so simple in the paper. Beat journalists have spent years in their area, cultivating sources and learning the ins and outs of their specialty. Not to mention investigative journalism, which is in grave peril. large online properties like huffington post are trying to step into the void and public radio (ie kuow) is increasing their investigative capacity but will it be enough? A vast array of alert citizens is a powerful thing and one to be encouraged but the experts are still to be valued - and if there is one thing the internet doesn't do yet, it's value the expert. Our history is being re-written by citizen encyclopedists (wikipedia) who's hobbyist abilites and talents are being brought to bear in an impressive but massively flawed effort. I for one don't want a world where the fourth estate is dictated by the mob. Things have to change, they will and they are. I don't think the model of niche players in it for passion (ie belief) is enough to sustain a vibrant media and an informed citizenry though.

Well, like I said in the post - though I maybe could have emphasized the point more - there's a question about what fills the gap during the turbulent interim between the end of newspapers and the rise of the next gestalt in the journalism industry. Obviously good investigative journalism requires certain kinds of skills and knowledge which take tme to develop. But I would be wary about stereotyping bloggers or people who use the internet as the medium for discussing world events as "niche players in it for passion." Obviously, the average blogger isn't going to be a very good investigative journalist, no more than the average short order cook is going to have a show on the Food Network. But look at a site like Talking Points Memo. It's a professional site which does original investigative reporting, and uses its readership in a constructive way to contribute to that reporting. And it's clearly profitable. Would you really describe what they do as "the fourth estate [being] dictated by the mob"? The medium still has to mature, but TPM shows that it can succeed as a venue for watchdog journalism.

Of course, the new media environment will probably lead to more ideologically-tinged reporting, with journalistic sites with a political bias (life Huffington Post) proliferating. But that would just bring the US media more in line with Europe, where newspapers of the left or right are typical. For that matter, it would be closer to the history of newspapers in this country before the 20th Century. It may be that in retrospect, the 20th Century - with its big city dailies, and national TV networks and news organization - will come to be seen as an anomalous period, when the distribution of information was inordinately influenced by the patterns of industrial production and their emphasis on standardization and mass production.

In conclusion: I, for one, welcome our new insect overlords.

seemed to quite interesting, ... thank you for your article

I had used a lot deal of my time searching for someone to explain this subject clearly to me and managed to do that.

Oh my god, there's so much worthwhile information here!

Thanks for the share. It was very interesting and informative.
Super Bowl 2012

In my view everybody must go through it.

Wow, there is really much useful info here!