Survival Map for the Apocalypse 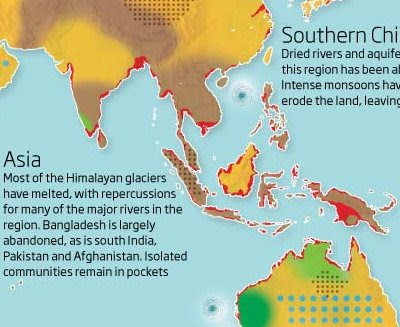 The accompanying article, by the aptly named Gaia Vince, depicts a scenario in which Earth warms by 4C by the end of this century. The future she foretells is a grim one: most of the world between about 40 degrees north and 40 degrees south will have become a vast desert, uninhabitable by humans, rendering most of the world's food-producing regions barren wastelands. The Sahara will spread into central Europe, and Japan and eastern China will become Gobified. South Asia will suffer from a fiercer but briefer monsoon, producing both more floods and more drought; much of Bangladesh will disappear altogether under rising seas. Rivers in Europe and Asia will wither. The Amazon might simply go up in a vast inferno. Vince suggests that 90% of the human population won't make it through these calamities.

Interestingly, there's a precedent for this kind of scenario:

The last time the world experienced temperature rises of this magnitude was 55 million years ago, after the so-called Palaeocene-Eocene Thermal Maximum event. Then, the culprits were clathrates - large areas of frozen, chemically caged methane - which were released from the deep ocean in explosive belches that filled the atmosphere with around 5 gigatonnes of carbon. The already warm planet rocketed by 5 or 6 °C, tropical forests sprang up in ice-free polar regions, and the oceans turned so acidic from dissolved carbon dioxide that there was a vast die-off of sea life. Sea levels rose to 100 metres higher than today's and desert stretched from southern Africa into Europe.

But of course, human civilization wasn't around back then to be shepherded through the bottleneck of dramatic ecological change. (Nor, presumably, did it happen as quickly as our present blitzkrieg against climatic stability.) How humans might adapt to a recapitulation of such changes will be, Vince suggests, the story of humanity over the next few centuries. The key to it will be an unprecedentedly massive migration. 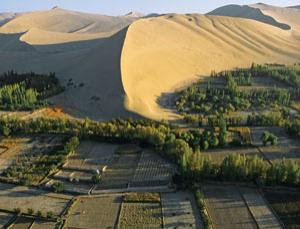 Even as the mid-latitudes wither into desiccated husks, storm systems will wander closer to the poles. With rising temperatures and greater precipitation, Canada, Scandinavia, and Siberia will become the most habitable places on the planet. They'll be our breadbaskets - vast agricultural areas peppered by dense, high-rise cities where most people will live.

Some of these predictions are a bit... horologically aggressive, let's say. Sky-rise cities popping up throughout a verdant West Antarctica? Not in this millennium. And even with a 10C rise, is it really reasonable to envision Siberia as the breadbasket of the world? A Siberia that's 10C warmer is still pretty damn cold. It's also unclear to me why there'd be total desertification near the equator; why would the tropical rain belt shut down? Nonetheless, it's worth noting that the 4 degree rise in global temperatures out of which this scenario is built is actually on the conservative side of current climate change predictions; a rise of 5 or 6C might be more likely. In any event, wake me when it is no longer conventional wisdom that the destruction of the planet is necessary to support a healthy global economy. Until then, I'll continue to assume that something like this apocalyptic scenario is pretty much destined to occur.

Incidentally, for some reason the article also has an interactive google map, which is mostly redundant.
Posted by Chachy at 6:39 PM

Sadly, none of the changes or reforms people are talking about make near the kind of difference we would need. The reforms we're talking about are the sort that will even allow us to "only" hit 4C worth of warming. Really stopping global warming will require geo-engineering (mirrors in space or something). Or mankind dying off.

This isn't about Republicans, Democrats or even the green party, none of them have a plan that will stop global warming, just reduce it by 5-40%. And to stop global warming through emissions reductions alone we're talking about getting rid of the global economy, not having a "less healthy" one.

The map is actually complete bollocks - virtually everything in it has been proved wrong, much of it before the map was produced. If you compare zone by zone, it actually reflects an increase of a minimum of 10c, and more likely 15C, which is way outside even the most extreme IPCC scenarios. A most unscientific piece of scaremongering. Happily it is now locked away behind a New Scientist paywall, which it is where it should stay until it is exhumed to be put in a museum of late 20th and early 21st century panics, to go with the Millennium bug, Swine Flu, Bird Flu, etc etc.

The beauty of these blogging engines and CMS platforms is the lack of limitations and ease of manipulation that allows developers to implement rich content and 'skin' the site in such a way that with very little effort one would never notice what it is making the site tick all without limiting content and effectiveness.

Really useful material, lots of thanks for your post.

Gosh, there is really much useful information above!

Quite worthwhile piece of writing, lots of thanks for the article.