Mapping the Invisible in the Jungles of Belize

A small aircraft flying back and forth above the ancient Maya city of Caracol, in Belize, used a laser to penetrate the dense forest canopy.

Viewed in three dimensions, the data revealed new ruins, causeways and agricultural terraces of the sprawling city. A detail [of a detail] of Caracol's city center is shown here.

Interesting stuff, but a little disheartening in a sense. The age of physical human discovery is truly over; nowadays all we get is laser-guided dispatches from the global panopticon.
Posted by Chachy at 10:20 AM 57 comments:

Hanging of the Parliament

So they went ahead and had those elections in the UK, as you may have heard. The result was a major victory for primary colors, as this Wikipedia map shows. (Blue = Conservatives; Red = Labour; Yellow = LD; assorted = regional and minor parties):

The political parties, however, didn't do so hot. Oddly, though electoral politics is supposedly a zero-sum game, all three major parties managed to lose. The Tories fell short of the majority they were hoping for; Labour lost a ton of seats and had their worst showing in decades; and the Lib Dems, despite anticipation of major gains and predictions that they might crack 100 seats, actually lost a handful of seats. The Tories now have 305 seats, to Labour's 258, and the Lib Dems' 57, with the rest distribute amongst various regional parties and a Green. With ~323 needed to form a majority, the parliament is, as they say, hung.

For comparison, this is what the map looked like after the last election, in ought-five: 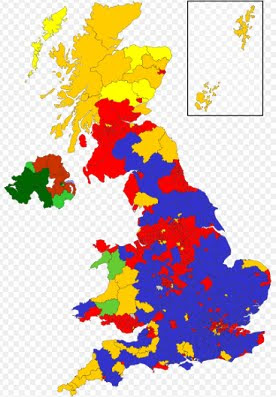 Thither, according to an oceanologist from the University of South Florida College of Marine Science Ocean Circulation Group, which has modeled the forecasted trajectory of the spill:

The narrator is expecting the slick to get caught up in the loop current, which feeds into the Gulf Stream, which runs up the East Coast of the US. Says he:

It's not looking good for the whole Gulf and for the East Coast, really... All these arrows are pushing it toward the loop current and once that happens, well, all bets are off... I hope that the people on the east coast are getting prepared for this, and Florida 'cause it looks like it's gonna come your way. It looks like it's not just a Gulf Coast deal.

At the end he gives two pieces of advice: to say our prayers, and to keep the pressure on BP to "spend every dime they have" on the clean-up. I humbly encourage my readers to put more energy into the latter.
Posted by Chachy at 11:06 PM 69 comments: