(Ahem: Based on 2005-2009 American Community Survey data, for the sticklers out there.) A racial profile of the United States, block by block, courtesy of the New York Times:

As you can see, this map divides human beings into the five standard types: white, black, Asian, Hispanic, and other. And it characterizes every single city block in the country according to those types. It scales up show whole regions of the country, and scales down so you can check out your own corner of your neighborhood. It is, as the title of this blog post indicates, ridiculously detailed. Which is to say, if you are the sort of person who can spend hours pouring over the patterns of segregation/integration in various US cities (hi!), an enormous time sink.

And, for good measure, they include maps like this, which shows Hispanic population by county, and scales down to individual census tracts: 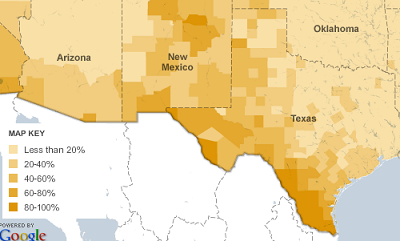 The 2010 Census: Population and Congressional Apportionment

Hey look, I have a blog! Guess I'll post something.

Yep, it's census stuff, from here. Roll over states for their particulars. I think it mostly speaks for itself - the Rust Belt continues to Rusts, the Sun Belt continues to... not rust. One thing I notice about the latter, though, is that there seems to be a bit of consolidation relative to earlier decades. Whereas growth had been widespread across many southern and western states from the 70s through the 90s, it seems a bit more focused in the last ten years, mainly centering on the states associated with megaregions: the Piedmont Atlantic (Georgia and the Carolinas), the Texas Triangle (Texas), and Florida (Florida) in particular. Less urbane states in the broader region, like Tennessee or New Mexico didn't gain as much in the past decade, relatively speaking. Blip? Trend? I speculate half-heartedly, you decide.
Posted by Chachy at 11:16 AM 149 comments: