Proving that you don't have to have centralized government control of your economy to wreak environmental havoc, that oil rig that blew up last week off the coast of Louisiana is causing problems: 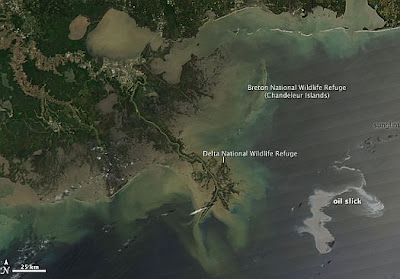 Officials from Louisiana to Florida remain concerned about oil leaking from a Transocean rig that exploded last week in the Gulf of Mexico, killing 11.

As crews attempt to stop the flow of an estimated 42,000 gallons a day escaping from a pipe about 5,000 feet below the surface, the oil slick has been slowly expanding across the Gulf.

Satellite images have helped officials track the slick as it swirls around the Gulf. Here's the best, most recent image captured by NASA's Aqua satellite.

barrels of oil a day, leaking up from the bottom of the Gulf where the rig's pipe snapped off (those are technical terms). And it looks increasingly likely that the only thing that will work to stem the leakage is to drill a relief well, but that'll take months. (Part of the problem is that the well is 5,000 feet down, which complicates any potential engineering solution, as you can imagine - but those are the sorts of problems you run into when you're scrounging under the earth's proverbial sofa for the every last drop of fossil fuel resources you can find.) The slick is already 80 miles by 36 miles across and likely to reach land within days. This thing could get very ugly for the Gulf Coast. 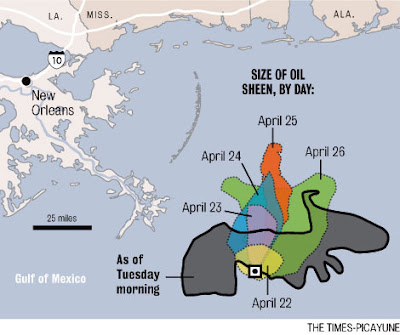 From the Times-Picayune.
Posted by Chachy at 1:23 AM 95 comments:

The BBC has an election seat calculator for the upcoming UK elections: I will say this: UK electoral democracy appears to be pretty messed up. Like, US-caliber mess up. I say this because as you can see, I've set the calculator so that the 3 majorest parties all get just about the same percentage of the vote (a third each, if you want to check my math). Yet look at the seat distribution that results from that popular vote outcome: 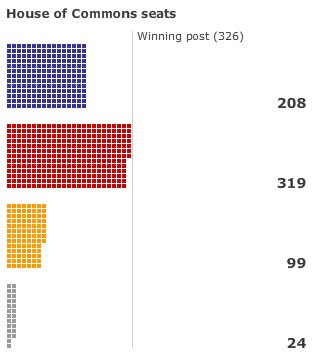 See? Messed up. Everyone gets the same number of votes but the Tories and Lib Dems combined don't have as many seats as Labour. W, if I may say, TF? I assume this is a function of the Lib Dem vote being highly concentrated in ethnic areas? And the conservative vote being somewhat concentrated in rural areas? But I'm sort of projecting from the American political scene, so that may be way off base.

At any rate, the BBC's "poll of polls" currecntly shows the Conservatives with a slight lead: 33% to 29% for each of the other two parties. That would result in 285 votes fo Labour to 244 for the conservatives, and a whopping 92 seats for team yellow. Democracy!!!And since this would result in a hung parliament, I assume the High Court would intervene and choose the victor in a 5-4 ruling according to their own political predilections. What, isn't that how everyone does it?
Posted by Chachy at 9:14 AM 100 comments:

So Long, And Thanks for All the Fish

Gone. Another image of the sea from March 2010: 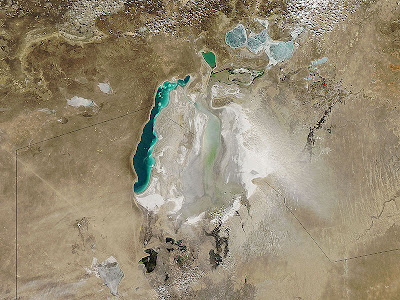 The drying up of the Aral Sea is one of the planet's most shocking disasters, U.N. Secretary-General Ban Ki-moon said Sunday, as he urged Central Asian leaders to step up efforts to solve the problem.

Once the world's fourth-largest lake, the sea has shrunk by 90 percent since the rivers that feed it were largely diverted in a Soviet project to boost cotton production in the arid region.

The shrunken sea has ruined the once-robust fishing economy and left fishing trawlers stranded in sandy wastelands, leaning over as if they dropped from the air. The sea's evaporation has left layers of highly salted sand, which winds can carry as far away as Scandinavia and Japan, and which plague local people with health troubles.

The story of the Aral Sea is the sort of thing you want to point to when people argue that technology and human ingenuity will save us from our own self-inflicted crises. The Shrinkage started with the Soviet Union's plan to divert the Amu Darya and Syr Darya to grow a bunch of cotton in the middle of the desert. Hilariously, the Soviets knew the Sea would vanish as a result of this plan - but they did it anyway:

''It was part of the five-year plans, approved by

the council of ministers and the Politburo,'' said Aleksandr Asarin, an expert at the Russian State Hydroproject Institute who angered his bosses by predicting, in 1964, that the sea was headed for catastrophe. ''Nobody on a lower level would dare to say a word contradicting those plans,'' he said, ''even if it was the fate of the Aral Sea.''

Apparently Kazakhstan is working to revive what is now the North Aral Sea with some success. There's less hope for the southern sliver of the sea that remains. The water, already so salty as to have been rendered lifeless, continue to recede from the stranded fishing villages and rusting husks of Soviet-era fishing boats that used to subsist on the sea's bounty.
Posted by Chachy at 4:02 AM 85 comments:

Via The Map Room, NASA's Earth Observatory posts some nice images of cities at night. E.g.: Border cities like Ciudad Juaréz, Mexico, and El Paso, Texas, illustrate different city patterns side-by-side, suggesting cultural influences on the development and growth of cities and infrastructure. Ciudad Juaréz supports at least 1,300,000 people. On the U.S. side of the Rio Grande, El Paso is marked by the brightly-lit Interstate Highway I-10 that cuts across the city. Although the area of El Paso, with an estimated population of slightly more than 600,000 is roughly on the order of the area of built-up Ciudad Juaréz, the density of settlement evidenced by the distribution of lights is much less.

No, not the decently high quality yet reasonably priced used clothing store on Westheimer Road in Houston, TX. Why would you think I'm talking about that? I'm referring to this map animation from the New York Times:

It's a heat map showing frequency of cab pick-ups at every single block of Manhattan for every single hour of the entire week. Animatable. Zoomable. Rolloverable for the specific number for any single block and a corresponding graph for the entire week. Really just a gratuitous display of data triumphalism from the Times who, one senses, are just sort of showing off at this point. This map, for instance, doesn't really tell you anything you don't already know - people take cabs in Midtown during the day, in the Village at night. But if you're of a certain bent you might find the sheer detail and comprehensiveness of the presentation here sort of jarring.

It does seem like we're approaching a point, rather rapidly, where almost any information about spatial conditions, processes, or events can be instantly translatable into cartographic form. I am looking forward to the day when I can zoom in close enough on Google Earth to see a real time image of myself sitting at the computer using Google Earth. The image will narrow in on the computer screen... closer, closer, until-
Posted by Chachy at 11:03 AM 52 comments: