The 10 Political Regions of America

We've all seen the maps of red states and blue states that show areas of strength for the Republican and Democratic parties, respectively. But of course, state borders weren't drawn to delineate areas of common political beliefs: Chicago has more in common with New York City or LA than it does with the rural towns of southern Illinois, for instance. So states are not the most helpful unit for analyzing voters and the ways they vote.

Here's Robert David's attempt at providing a better description of the political geography of the US: 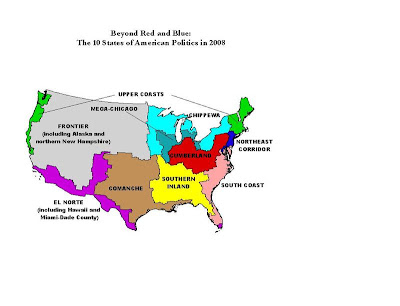 David divides the US into 10 regions, within each of which the demographics are broadly similar and the culture is generally consistent. These are:

1) The Northeast Corridor: the big cities of the east coast, from NYC to DC. Densely populated and diverse, the area is strongly Democratic.

2) Upper Coasts: includes the uber-liberal regions of New England and the West Coast, from San Francisco north. Though mostly white, these areas are among the most Democratic in the country.

3) Chippewa: the northern Great Lakes region, from upstate New York to Minnesota, and with an arm down into Iowa. The area leans Democratic, despite seriously low levels of melanin.

5) Cumberland: a mix of Appalachia and midwestern farm-and-factory country, it's one of the older and whiter regions of the US. It's a fairly strong region for Republicans.

6) South Coast: stretching from the mid-Atlantic to central Florida, the region has a relatively high black population, as well as a number of 'New South' boomtowns. It's the only region to switch sides from 2004 to 2008, supporting Bush and then Obama.

7) Southern Inland: most of the interior South, from Missouri to Florida. It's one of the Republicans' strongest regions.

8) Comanche: this aggregation of areas in the Great Plains and along the Gulf Coast was McCain's best.

9) El Norte: an immigrant-heavy region with a heavily Hispanic population. Includes most of the population of the Southwest, plus Hawaii and south Florida. Obama won it by 18%, a big improvement on Kerry's 3% margin.

10) Frontier: tumbleweeds, etc. Includes, interestingly, a slice of northern New England. Leans Republican, though Democrats are getting more competitive in some of these areas (after dominating them back in the mid-twentieth century).

Here's how the vote broke down in the 2008 election:

It's an interesting map, and a highly debatable one. To make just one observation: based on the election results of the past year, it seems that Appalachia or the Upland South - the region running through the hilly parts of Pennsylvania down through Geargia, then west through Arkansas and Oklahoma - ought to be regarded as a distinct and coherent political region. It was Clinton's strongest region against Obama, and then constituted most of the only area of the country where McCain outperformed Bush's 2004 vote percentages. Still, it's an interesting way of looking at the country, and thinking about the cultural foundations of voting behavior.
Posted by Chachy at 3:37 PM

Chicago has more in common with New York City or LA than it does with the rural towns of southern Illinois, for instance. So states are not the most helpful unit for analyzing voters and the ways they vote.

Thanks so much for your article, very helpful info.

Quite useful info, thanks for this article.