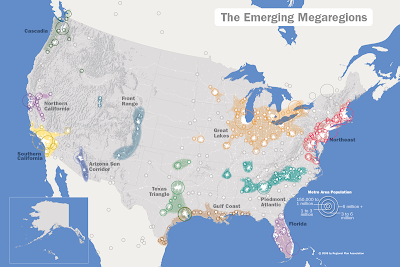 Here's a map that's pertinent to the earlier post on high-speed rail. The America 2050 organization is some kind of non-profit/think tank that deals in planning for future growth in the US, and they've put together this map of what the US will look like in 2050, entitled "The Emerging Megaregions." Essentially, they foresee the swelling megalopolises in several different areas of the country merging with each other to form giant conurbations. They define them thus:

As metropolitan regions continued to expand throughout the second half of the 20th century their boundaries began to blur, creating a new scale of geography now known as the megaregion. Interlocking economic systems, shared natural resources and ecosystems, and common transportation systems link these population centers together...

Most of the nation's rapid population growth, and an even larger share of its economic expansion, is expected to occur in 10 or more emerging megaregions: large networks of metropolitan regions, each megaregion covering thousands of square miles and located in every part of the country.

The 11 megaregions as defined by America 2050 are:

1. Northeast. Also known as Bosnywash, after three of the main nodes along its spine, or the Northeast Corridor, this is the most fully developed megaregion. It already had 50,000,000 residents in 2000, and contributed a fifth of the national GDP.

2. Great Lakes. Less cohesive than the Northeast, perhaps, but absolutely sprawling in size, the Great Lakes megaregion encompasses the whole area from Milwaukee to Buffalo, and from St. Louis to Detroit (and possibly Toronto, though that's vague). It actually has a larger population than the Northeast - 53,000,000 in 2000, and expected to gain another 9,000,000 by 2025, though it will be doing so in the face of the continuing erosion of the region's mainstay manufacturing sector.

3. Piedmont Atlantic. Stretches from Birmingham, AL through Atlanta to North Carolina's Reseach Triangle. It's one of the boomingest regions in the country, and will grow by 38% - to 20,000,000 - by 2025.

4. Florida. Basically the whole state, less the panhandle. I wish I could report that Florida is expected to evolve into a dystopian hellscape, populated by McCarthian (as in Cormac) gangs of countryside-terrorizing cannibals, even as the seas rush up to sweep away whatever pathetic fragments of civiliztion might have been spared from total collapse. However, America 2050 seems to think Florida will in fact be a bustling, diverse, and growing region of more thn 20,000,000 souls, anchored by the international city of Miami. We'll see who's right...

5. Gulf Coast. The coastal region of the Gulf of Mexico, from the Florida panhandle all the way to Brownsville, including New Orlans and Houston. Will have a population of 16,000,000 by 2025, constituting 4% of the nation's growth and economic output. (Frankly, though, I'm not sure if I quite buy this as a megaregion. It includes vast areas of sparsely populated land, in the bayous of Louisiana and the cattle country of south Texas. Plus, note that Houston is also counted as part of the Texas Triangle (q. v. #6 below), which seems like cheating.)

6. Texas Triangle. The eponymous geometrical figure is formed by Houston, Dallas-Fort Worth, and San Antonio, with Austin in there as well. A2050 says that "by 2050 about 35 million people, or 70 percent of the population of Texas, will live in the four metropolitan areas that comprise the Texas Triangle" - the consequent of 45%+ population growth. Pretty amazing. The San Antonio-Austin-DFW spine is already sort of congealing into a Bosnywash-type melded conurbation. Meanwhile, Houston has one of the world's busiest ports, directly connecting the region with international markets.

7. Front Range. The string of cities along I-25, from Cheyenne, WY to Albuquerque, NM, anchored by Denver. It's the smallest of the megaregions - it will have just under 7,000,000 people by 2025 - but is growing as quickly as anywhere in the country.

8. Arizona Sun Corridor. Phoenix and Tucson and points in between. It's growing at a phenomenal rate - 62% - and will have over 7,000,000 people in 2025. The ASC, Front Range, and Cascadia could have an interesting debate over Best Scenery.

10. Northern California. This includes the Bay Area, of course, as well as Sacramento, Tahoe/Reno, and much of the Central Valley of California. It'll be home to 17,000,000 by 2025. (I've also heard S. Calif and N. Calif referred to as the single megaregion of "San-San": San Diego to San Francisco, though it's really more like Tijuana to Santa Rosa.)

11. Cascadia. The Pacific Northwest Coast, from Vancouver, BC to Eugene, Oregon, including Seattle and Portland. Known for its musical heyday 15 years ago, its disastrously albinic population, and Bill Gates. A.k.a. "Ecopolis." Will have more than 10,000,000 caffeine-addled residents in 2025.

Whew. That was quite the tour. Now let me just say, in terms of sustainable development and urban growth, that the emergence of these megaregions needn't be a disaster - but that there's a better way and a worse way for growth to occur. You can well imagine these areas serving as the regional foci for a national high-speed rail system, as described in the post below. They would be well-suited for such a rail plan: imagine commuters shuttling from Portland to Seattle, or Raleigh to Atlanta, every day on 200-mph Supertrains. That would be great for quality of life, great for economic growth, and great for the environment. On the other hand, simply filling in the spaces between cities with mile after endless mile of sprawling, identityless suburbia will be terrible for quality of life (imagine the traffic and the pollution), and might well mean - literally - the collapse of the global environment. It's strange to say that these are the stakes of something as seemingly arcane as megaregional urban planning, but there you are. This is the world we live in.
Posted by Chachy at 7:55 PM

Well, I do not really believe this will have success.

I do agree with all of the ideas you’ve presented in your post. They are bet365 really convincing and will definitely work. Thanks, betting odds