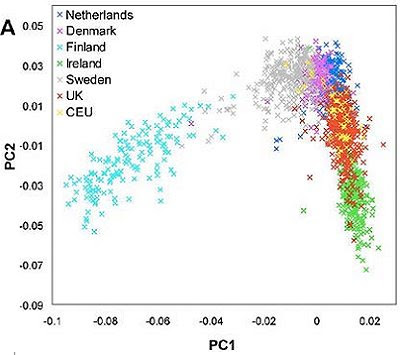 Says the Times: "The graphic records two sets of correlations (labelled PC1 and PC2) in the genetic data derived from the various populations." Can I say what that means, exactly? I cannot. But the key takeaway here is that the proximity of any two points on the chart correlate to genetic similarity between individuals. And as you can see from the color-coding, individuals from the same country clearly cluster genetically. There is, though, a fair bit of overlap, except when it comes to the ever-anomalous Finns, who appear to have wandered off the genetic reservation altogether. Indeed, the Finns appear to be suffering the peculiar existential condition of not even being all that genetically similar to themselves. (CEU refers to the general European population, by the way.)

The researchers have drawn some interesting conclusions from their study.

The Australian team says that natural selection has probably helped differentiate the various populations in their survey. Another factor may be that the Irish have inherited more genes from the first settlers of Europe, hunters and gatherers who were followed by people who practiced agriculture, while the Finns may have some ancestors who came from East Asia.

It would be interesting to discover that the Irish have evolved to inhabit a uniquely Irish niche in the ecology of Northern Europe, and the Swedes another distinct niche, etc. That would seem to be to me the consequence of what these researchers say, and I find it surprising; I always figured whatever genetic differences existed between populations were just due to genetic drift. But of course, whatever differences we're talking about aren't very large, anyway. It's not like we're talking about different species or anything.

On the other hand, if you cock your head and look at a Finn in just the right light...
Posted by Chachy at 11:54 PM

Sorry to be late to the party, but I would tend to suspect the "UK" category -- normally with this sort of data, splitting Wales, England, and Scotland up is interesting.

I love when I find blogs like yours! This issue about genetic and DNA is so impressive! I did not think things were that way, however, technology has made great advances lately and still keep that way of progress

Thanks for sharing genetic map of northern Europe i m looking forward to it.

wow great i have read many articles about this topic and everytime i learn something new i dont think it will ever stop always new info , Thanks for all of your hard work!

Natually I’ll offer you a link in your web blog. Thanks for sharing.

I’ve to say, I dont know if its the clashing colors or the dangerous grammar, however this weblog is hideous! I mean, I dont need to sound like a know-it-all or something, but might you could have possibly put a little bit more effort into this subject.

i screwed the taxpayer said...

Awesome blog post, numerous high-quality data. I am going to show my friends and ask them the things they think.

It is rare these days to find websites with useful information . I am relieved I came upon this site.

Hi. I wanted to drop you a quick word to express my thanks. Ive been following your weblog for a month or so and have picked up a ton of excellent info and loved the tactic youve structured your site. I am trying to run my very own weblog nonetheless I believe its too normal and I need to deal with a lot of smaller topics. Being all things to all folks is not all that its cracked up to be.

I think this is an informative post and it is very useful and knowledgeable. therefore, I would like to thank you for the efforts you have made in writing this article. high Da blog commenting

articles that are extraordinary and very riveting attention
we hope that this can continue.
we like articles like this
thank you for making a great article
judi bola

I like this artickle thanks you!!
bandar poker online indonesia

Thanks you very much i like your articla-blog-website.!!!
poker88

Alot of blogs I see these days don't really provide anything that I'm interested in, but I'm most definitely interested in this one. Just thought that I would post and let you know. Nice! thank you so much! Thank you for sharing.
App Development in Mumbai