Australia is the Canary in the Global Waming Coal Mine

The future is here, and it is Australian. This map shows the expected spread in the range of dengue fever on the continent - almost all the way to Sydney. 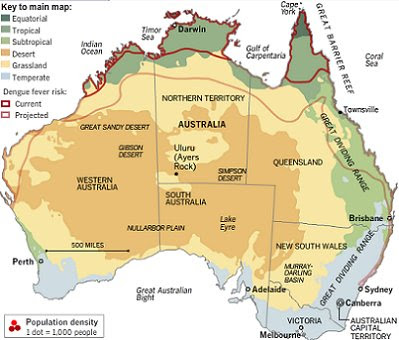 According to this LA Times article, Australia is experiencing some of the first pronounced effects of global warming:

They call Australia the Lucky Country, with good reason. Generations of hardy castoffs tamed the world's driest inhabited continent, created a robust economy and cultivated an image of irresistibly resilient people who can't be held down. Australia exports itself as a place of captivating landscapes, brilliant sunshine, glittering beaches and an enviable lifestyle.

With few skeptics among them, Australians appear to be coming to an awakening: Adapt to a rapidly shifting climate, and soon. Scientists here warn that the experience of this island continent is an early cautionary tale for the rest of the world.

Among those cautionary experiences: a heat wave that killed 200 people in February, followed by fires that killed another 173, as well as - and this astonished me - "a quarter of Victoria state's 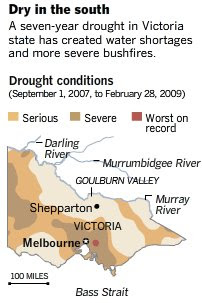 koalas, kangaroos, birds and other wildlife." Meanwhile, the drought in Victoria has desiccated the country's breadbasket; rainfall has been less than half of average for more than a decade. The article characterizes the agricultural sector as "collaps[ing]," along with the country's self-sufficiency in food production. And even as the once-fertile south literally dries up and blows away, the tropical wet season in the north is becoming longer and more severe, with flooding and cyclones becoming more frequent. Higher water temperatures are bleaching the coral of the Great Barrier Reef, with one report saying the reef will become "functionally extinct" by 2050. That's barely 40 years from now. Inland wildlife, meanwhile, is being chased up the slopes of Australia's smallish mountains by advancing heat.

Australia, however, likes to burn coal. Its people enjoy the electricity provided by burning coal, and they like the economic growth that comes from such a cheap energy source. So, they are the world's highest per-capita producers of greenhouse gases, which means they are contributing disproportionately to the withering and charring of their own country. That is, you'll note, ironic.

Australia. Apocalypse. I think we all know where this is headed. 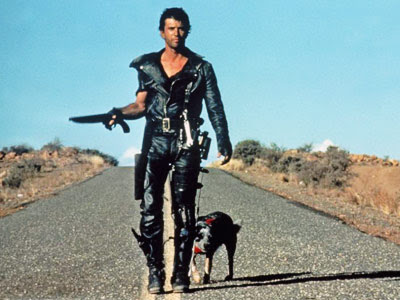 Maybe they are, but they have to wake up, because the pollution they are part of the global warming, and they should help to reduce it.

Interesting blog. It would be great if you can provide more details about it. Thanks you.

Thank you for the info. It sounds pretty user friendly. I guess I’ll pick one up for fun. thank u

Howdy! This is my first visit to your blog! We are a collection of volunteers and starting a new project in a community in the same niche. Your blog provided us valuable information to work on. You have done a marvellous job!
Remixuri 2011

Uncover out how to act a invalidate telephone reverse phone lookup or a cell phone lookup otherwise yet a telephone number lookup search with the intention of hit upon absent who is losing so once to person to facilitate has been calling you this full moment in time ok.

I enjoy this nice invalidate telephone lookup otherwise mobile phone search or else cellular phone number search spot. I know how to understand a weighty deal of cell phone lookup substance on quash telephone search here nowadays whilst I checked not in this guide here.

Really worthwhile info, lots of thanks for this article.

This cannot have effect in actual fact, that's what I consider.

Very exclusive photo and article thanks for sharing.

Interesting blog. It would be great if you can provide more details about it. I always hope that sites like this are always updated.

old information but still very interesting for see, I am quite happy with what I have read here. tenks.
go.

it is very nice that I read this, I hope in the future there are even more of her information. regards.