Immigrants Moving to the Suburbs

In another entry in its series on immigrants in the US, the New York Times has an article that's nominally about the shift of immigrant populations out of ethnic urban neighborhoods and into the suburbs, but actually seems like a weird stitching together of one article about social problems in immigrant communities with another about immigrants moving to the suburbs. Anyway, they have these maps of the DC area. 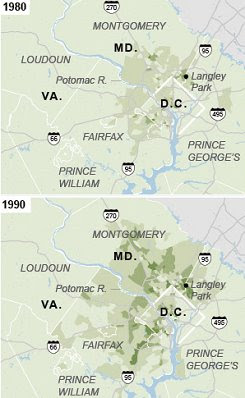 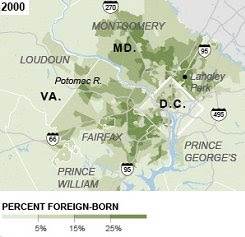 And this is from a chart on where immigrants are living. 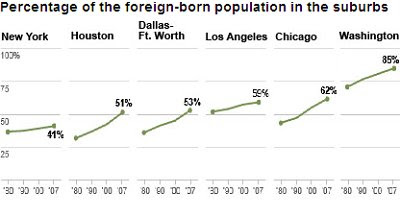 The article is a little strange. The bulk of it is an anecdotal account of a Maryland teenager who has had verious teenager-in-a-bad-social-environment type problems. But then the article keeps insisting that immigrant kids are actually doing fairly well overall, compared to native-born kids as well as prior immigrant groups. And then it occasionally makes a tenuous connection between one or the other of these themes and the fact that a lot of immigrants in the suburbs these days:

Nationwide, about half of immigrants live in the suburbs, including more than 40 percent of the immigrant poor, according to Audrey Singer and Jill H. Wilson of the Brookings Institution. Many live in places that did little to promote immigrant mobility even in good times; now, vanishing jobs and strained safety nets increase the risk of downward assimilation.

And a few comments are just odd:

Now nearly two-thirds Latino and foreign-born, it has the aesthetics of suburban sprawl and the aura of Central America. Laundromats double as money-transfer stores. Jobless men drink and sleep in the sun. There is no city government, few community leaders, and little community.

In so far as the article has a point, it seems to be that, though most immigrants are following the old American pattern of slowly climbing the social ladder, a multi-generational task, there is a minority that isn't.

On average, children of immigrants today are progressing well, with levels of earnings and education similar to peers whose parents are native born. Concerns about downward mobility mostly focus on the children of the least-educated immigrants, particularly poor Mexicans and Central Americans who account for more than a third of today’s second generation.

Some scholars predict that they will follow poor Italians, who rose more slowly than other groups but rose nonetheless. Others worry that they may repeat the experience of poor African-Americans, with a significant minority mired in long-term poverty and social disorder.

Semi-relatedly, Matt Yglesias suggests a possible future for racail categorization in the US:

I read Ta-Nehisi Coates casually refer to Yeah Yeah Yeahs frontwoman Karen O as a “white girl.” In reality she is, as they say, “Half Korean, 100% Rock Star”. Nevertheless, I think there’s a clear sense in which it strikes people as more intuitive to refer to a half-white, half-Korean indie rock star born in Korea and raised by both parents in New Jersey as “white” than it is to refer to a half-white, half-Kenyan President born in Hawaii and raised by his white mom and grandparents as “white.”

All of which is to say that there’s a decent chance that we’re evolving in a direction where the salient divide isn’t between “white” and “non-white” but between “black” and “non-black.”

It's possible to imagine a future where "blackness" is tied to certain cultural touchstones, like music and fashion, but also to class, and where Hispanic and Asian immigrants identify more closely with "whiteness" or "blackness" depending on their socioeconomic status. And maybe this is already sort of happening in some cases. That would be problematic and bad for a lot of reasons; but, from a dispassionate perspective, also a sort of interesting evolution of the meaning of race in American society. (Of course, the ideal future would be one in which racial dichotomization is left behind altogether.)
Posted by Chachy at 1:06 AM

The comment about 'race' being perceived on a black/non-black axis is fairly accurate genetically given that the major DNA tree trunk/distinction is betweeen Africans and everyone else who Exodused Africa to Australasia, Asia, Europe and the Americas, viz The BBC series The Incredible Human Journey presented by Dr Alice Roberts, I think.

Oh my god, there's so much helpful info here!

Wow, there is a great deal of effective material above!

I hope you have a nice day! Very good article, well written and very thought out. I am looking forward to reading more of your posts in the future.

very useful article, thank you very much and pardon me permission to share the article here admin :