The Natural Resources Defense Council has worked with Google to create a Google Earth mapping tool which shows environmentally sensitive areas of the American West. 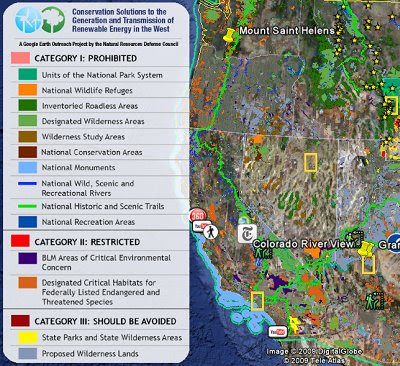 The NRDC, like a lot of environmental groups, is especially concerned about the potential damage to wildlife and ecosystems of developing the region's prodigious energy potential. The irony is that much of this energy is in the form of wind and solar power - the very resources which need to be developed if we have any chance of doing anything about global warming. Obama has made some pretty bold moves to invest in those renewable energy resources in the west: a big chunk of the recent stimulus was devoted to building up the infrastructure that is sorely needed if that energy is to be brought to market.

The problem is that that infrastructure - the wind towers and solar panels, and all the high-voltage electrical lines that will connect them to the national grid - can cause problems for wildlife. From a New York Times article on the NRDC map:

The wind industry publishes photos of cows grazing placidly around towers, and argues it is compatible with nature. But Brian A. Rutledge, executive director of the Audubon Society of Wyoming, said wildlife and domesticated species were different. “We have species of birds, for example, that won’t nest within 200 yards of a road, period,’’ he said. Some prairie birds will not venture anywhere near a vertical object like a tower or a power-line pylon, he said, probably because they are genetically imprinted to avoid natural vertical features, like trees, where predators perch. The lesser prairie chicken, he said, will not cross under a power line, even between widely spaced towers. “It becomes like a river down the middle of their population base,’’ he said.

One such species is the sage grouse, the range of which sits right in the middle of an area where a lot of new transmission lines are likely to be needed.

As the Times puts it, the map amounts to the "battle lines being drawn" by the NRDC and like-minded organizations - a declaration of where they intend to fight development. It 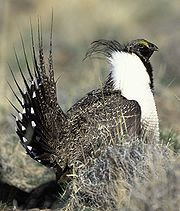 depicts areas that are prohibited, such as natural parks and wilderness areas, where devlopment is already prohibited; restricted areas, where rules on the books limit development, often because of threatened species; and "areas that should be avoided" - where, in other words, development may be permitted, but the NRDC is prepared to fight it.

I'm sympathetic to the NRDC, and we should all hope that development takes place in the most ecologically sensitive way possible, yadda yadda. But this framing, from the Times article, really seems to miss the forest for the trees (or the world for the forest):

And while the battle lines are quite literally available with a few mouse clicks, the intent is not entirely hostile, with the national groups recognizing that the issue is environmental balance, pitting prairie species like the greater sage-grouse against animals like the polar bear, which lives on ice that is melting because of global warming, some of it probably caused by coal-fired power plants that wind and sun could partly replace.

What a trivialization of what global warming is all about! Polar bears pulling a dodo is the least of our worries when it comes to global warming. It's not the sage-grouse vs. the polar bear; it's the sage grouse versus massive ecological calamity and the possible meltdown of entire ecosystems, not to mention famine and the mass dislocation of human populations. I'm all for sage or any other kind of grouses; but if legal wrangling over their protected status holds up the development of one of the few promising options we have for getting off of fossil fuels, then I will be mighty annoyed.

But because I am a fair man, I will let the sage-grouse have the last word. Here is a detail of their range from the Google Earth map. 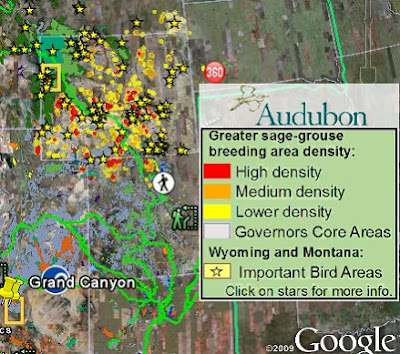 There have *got* to be transmission line routes which don't disrupt local ecosystems.

If it's the pylons, how about burying the lines in underground pipe for that part of the distance?

For creatures which won't go near roads, well, we can certainly detour the power lines to follow existing roads.

Very good information, we are close to experience a big change in our planet, we all should be mentally prepared.

Very helpful piece of writing, much thanks for the article.

Such a wonderful information for all the people to aware global warming.
Web Design Company| Clone Script|

You might be qualified for a new solar energy rebate program.
Find out if you're qualified now!