The Atheist Map of the UK

The Guardian has an interactive map of religious belief - or the lack thereof - in the UK. 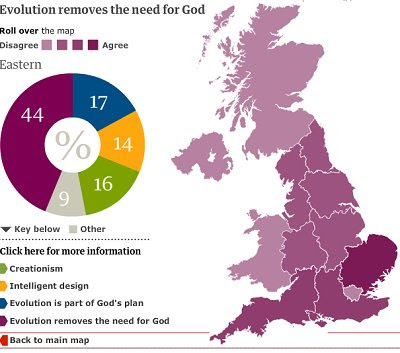 The map is based on a survey by the think tank Theos which polled respondents on their beliefs about human origins. The map indicates the percentage of the population who agree with the proposition that 'evolution removes the need for God.' The map gives stats for each region of the country; the pie chart on the left is for the Eatern region - the most atheistic region of the country, where fully 4 out of 9 people say that evolution obviates a religious explanation for the existence of life.

London's low ranking is a bit of a shocker. Could it be the large immigrant population there importing beliefs from more devout corners of the globe?

It's interesting to compare this map to the map of atheism in the US. The most obvious thing to note is that the US is way more religious than the UK. The two maps aren't 100% comparable. In fact, neither map directly depicts self-reported atheists as such: the US map shows "non-religious" population, and this UK map shows those who choose belief in evolution over belief in God, when given the choice. But those are both pretty good proxies for atheism/agnosticism. And a comparison shows that the most religious regions of the UK barely approach the least religious regions of the US: only the states of Vermont (34%) and New Hampshire (29%) have more non-believers than the most religious region of the UK, Northern Ireland (28%).

But none of that is too surprising. What I find more interesting is a possible correlation between the UK and the US. The most religious regions of the UK are Scotland and Northern Ireland. Those happen to be the source regions for the Scots-Irish who populated the the American South as early as the early 18th Century and contributed much to the development of the culture of that region, which is now the most religious in the US. Of course, the South is far more religious than Northern Ireland or Scotland is today; but could the relative strength of religion in these areas within the context of their broader societies be causally related? Is it a function of that centuries-old cultural kinship? It seems possible.
Posted by Chachy at 2:57 PM

Evolution doesn't obviate the "need" for religion any more than the heliocentric model of the Solar System, which once was perceived as a comparable threat. It looks like religion is going to be with us always.

L: I thought the wording of the question was a bit weird. But: science doesn't have a problem with religion? Allow me to introduce you to Mr. Richard Dawkins.

Also, I think many creationists would say "why is it that science has a problem with religion, but religion doesn't have a problem with science (as long as science leaves questions of ultimate meaning to religion)?"

Note also that the most athetistic part of the UK is East Anglia, which is also where the Puritans & Pilgrims who settled New England are from. Those folks have always been on the forefront of seismic, agitating, status-quo-challenging social movements that first swept England (leading to the English Civil War) and later the US, from Puritanism to Abolitionism to Prohibition to the Civil Rights movement to Gay Rights, etc.

@K H D and sometimes T Yeah, danmn them to Hell for not being shallow careless destructive drunks like you. Yet another atheist reveals how stupid and useless they are. And damn those belief systems! It's such a sin to have a system of beliefs. What are you talking about you drunken moron? Do you mean it's bad to have orderly logical beliefs, rather than the "random" immoral "chaos" in your head? Worship your God or burn in Hell forever with no "second billionth" chance to repent. Yes criminal complainers who get chance after chance to and second after second to learn about and turn to God, it's that simple, but merciful not-simple God is patient with many of you despite your impatience with Him.

And that poll is stupid: how is simply asking a person if evolution spells this or that a "good indicator" of what a person believes? Creationists believe evolution removes the need for God too, yet you call it good? What an ignorant moron you are. Stop blogging you confusion-spreading idiot, unless you repent.

how cool, our country is filled with intelligent people who rejects these stupid ideas.

Come across away how that get something done a annul cell phone lookup reverse phone lookup a cell phone lookup otherwise yet a cellular phone number lookup lookup with the intention of discover away beginning home who is down that anyone with the purpose of has been calling you this complete point ok.

I enjoy this nice overturn telephone search otherwise cellular phone lookup or telephone number search spot. I be able to understand to a talented extent of phone number lookup substance about rearrange phone search here at present after I checked out this guide here.

Thanks for the post. It was very interesting and meaningful.

Thanks for sharing your info. I really appreciate your efforts and I will be waiting for your further write ups thanks once again.

over the counter viagra alternative said...

Thanks for a marvelous posting! I seriously enjoyed reading it, you can be a great author

I consider everyone ought to browse on it.

Evolution and creationism can coexist. 7 days can mean 7 ages or even 70000000 years. Plus a religion doesn't have to have creationism.

We must fuck the Queen in the face,
also lords.

We should vote for our rulers,
also remove all religious symbols from our flags.

Exceilent blog you have here but I was curious abou t if you knew of any communi ty forums tha t cover the same topics talked about in this article? I’d really like to be a part of online community where I can get advice from other experienced individuaIs that share the same interest. If you have any suggestions, please let me know. Appreciate it!

I was about to say something on this topic. But now i can see that everything on this topic is very amazing and mind blowing, so i have nothing to say here. I am just going through all the topics and being appreciated. Thanks for sharing...

thanks for sharing.. and very useful
your website came up, it looks good.
I’ve bookmarked it in my google bookmarks.

You are absolutely incorrect with your commentary regarding Scotland. Scotland is the least religious part of the UK, NOT the most. Just look at the UK census stats, which are more reliable than this survey. Scotland is the only part of the UK to have no Sunday trading restrictions, unlike England, Wales and Northern Ireland. You are correct about Northern Ireland, however. England is noticeably more religious than Scotland