More good stuff from Good. This is from a pseudo-map depicting cuts in the budgets of transit systems around the US since the economy started to do its frog-in-a-blender routine. 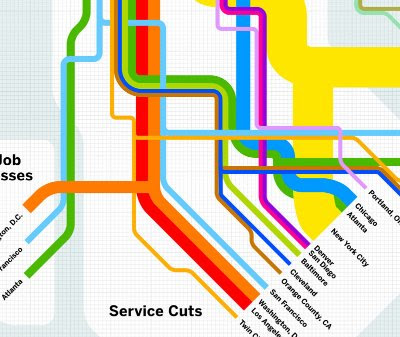 Good has this tendency to publish these graphics that are really impressive looking, and are awesome from a design perspective, but on closer inspection actually contain less information that it seems like they do. This, for instance, looks like it's trying to tell us about the relative scale of cutbacks at transit systems around the country, and maybe even the division of those cuts between job losses, service cuts, and fare hikes. Turns out, though, the only comparative data represented here is the relative size of the 15 largest transit systems where any sort of cuts have been made (though that's still sort of interesting). It doesn't tell us anything about the size of the cuts in either absolute or relative terms. Looks cool, though.

Last year, Americans took more than 10 billion rides on public transportation, the highest level in more than 50 years. But despite the increases, public transit systems are being forced to cut back service, risking losing many of the riders they gained due to high gas prices and a bad economy. In New York, for example, the Metropolitan Transit Authority is moving forward with plans to drastically raise fares and totally eliminate some subway and bus lines.

This is annoying - literally, in that it will make it less convenient and more expensive for people to get around; but also because the middle of a recession is the worst possible time to make such cuts. Firing people who work in these transit systems obviously raises unemployment, which makes the recession worse; cutting service harms people who - perhaps unable to afford to drive a car - are newly dependent on transit; and raising fares hurts people just at the moment when every penny counts the most for them. To a point, it's unavoidable; state and local revenues go way down during a recession, so they end up making cuts in lots of areas, including transportation. On the other hand, I vaguely recall a big to-do not long ago about the federal government spending a not inconsiderable amount of cash to try and stimulate the economy. Seems they could have found the funds in there somewhere to at least bridge the lost revenue gap and keep cities from having to cut services; and it seems like the sums that would be required to keep the buses running in Atlanta, say, would have been pretty paltry on the scale of a $700,000,000,000 bill. But local mass transit (unlike alternative energy and high-speed rail) ended up getting left out of the stimulus for the most part. Guess people who ride subways and buses weren't considered "shovel-ready."

Transportation for America, by the way, has its own map of transit cuts around the US. According to them, "every $1 billion invested in public transit operations generates 60,000 jobs." That would mean $100 billion would save 6 million jobs - well ahead of the pace Obama tried to set by saving 3.5 million jobs with $800 billion. Some sort of law of diminishing returns undoubtedly applies, so it probably wouldn't be possible to save 6 million jobs in mass transit. Still, it has to be one of the more efficient uses of government money available.
Posted by Chachy at 11:19 PM

Thanks for the post. I liked it. Keep going I follow you.
Money Talks| Super Bowl Commercials 2012

I really like your writing. Thanks so much, finally a decent website with good information in it.

Hey, Really great work, I would like to join your blog anyway so please continue sharing with us,

I hate bus stops. Especially when I'm alone, I don't like waiting there. It's so creepy and unsafe.

very interesting info in this content, my love and I can only say many thanks.
by alat seks.
alat bantu wanita.
alat bantu pria.
toko mainan seks.

old information but still very interesting for see, I am quite happy with what I have read here. tenks.
go.