How To Be a Hunter-Gatherer

Or a gatherer, at least. Fallen Fruit is an LA-based organization that is making maps of publicly available fruit and nuts, like this one of a neighborhood in Santa Fe, New Mexico: 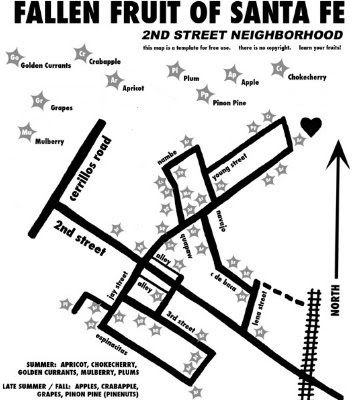 Their goals are idealistic, communitarian, and downright Michael Pollan-y:

"Public Fruit" is the concept behind the Fallen Fruit, an activist art project which started as a mapping of all the public fruit in our neighborhood. We ask all of you to contribute your maps so they expand to cover the United States and then the world. We encourage everyone to harvest, plant and sample public fruit, which is what we call all fruit on or overhanging public spaces such as sidewalks, streets or parking lots.

We believe fruit is a resource that should be commonly shared, like shells from the beach or mushrooms from the forest. Fallen Fruit has moved from mapping to planning fruit parks in under-utilized areas. Our goal is to get people thinking about the life and vitality of our neighborhoods and to consider how we can change the dynamic of our cities and common values.

As for their (rather hypothetical) goal to eventually map publicly available food throughout the world, I will say this: for people in much of the developing world, there'd really be no need - they're likely already growing a lot of their own food, and a lot of them who are just at a subsistence level might not take too keenly to the idea of making their fruit available to anyone who walks by. Only in a place like the US, where the practice of cultivating our own food sources is largely a lost art and there's already a superabundance of food, does the ideal of publicly pluckable food make much sense. (That's as opposed to organized systems of food sharing in communities, which can succeed both practically and morally.) Indeed, the global food distribution system on which the US relies is inherently such a delicate operation, dependent on a broadly functioning global economy and cheap and abundant fossil fuels for production and transportation, that a day may yet come when we'd see the local food production of our own neighbnorhoods as more than the idle hobby of aging hippies and idealistic liberals.
Posted by Chachy at 1:22 PM

Oh wow, this got every one going - fascinating input mixed with a good read.