Via PCMag's Security Watch blog, the Conficker Working Group has infection maps of the Conficker worm, which is some sort of centipedal beast that feasts on the souls of computers or something.

The map is based on infection rates as of April 1st. This caveat is given:

While the maps appear very detailed, the mapping process itself is somewhat inaccurate. Each area of color is a spot that must be placed and then a range of color applied based off the density of data in that spot. So, the greater the scale of the map there is an increased bleed effect of the applied dots and distribution. Areas can appear far more infected than they are in actuality. So we present the maps as something to see within those limitations and built-in levels of inaccuracy.

Still, some patterns are evident. As the Security Watch blog post notes, the infection rate seems to be much denser in Italy than in France. 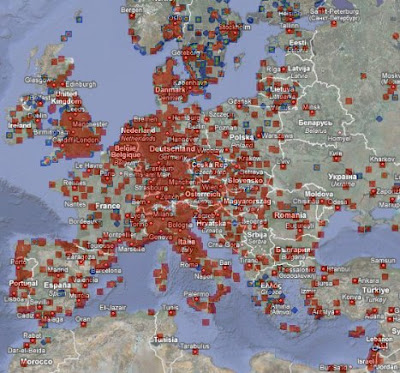 The blog also gives rates of infection for some countries; the winner is Vietnam, with a rate above 13%, followed by Brazil and the Phillipines at 11%. The US is at 4.7%, and Italy has the highest infection rate in Europe at 3.6%. (It's not clear to me, though, whether these numbers represent the percent of all infected systems that reside in a given country, or the percent of systems in the given country that are infected.)
Posted by Chachy at 10:08 PM

hmm. That map likely represents a rough picture of the security infrastructure of countries networks as well, along with the defensive knowledge of consumers.

Really effective data, thank you for the article.

These kind of post are always inspiring and I prefer to read quality content so I happy to find many good point here in the post, writing is simply great, thank you for the post penis enlargement pills penis enlargement VigRX Plus

The person that it was behind that. It was something else. he did a great virus.we have to it that.

The Conficker worm, aka Downadup, has infected millions of PCs worldwide.

Good writing and interesting to note, also visit the website jasa fotocopy murah I take care of that today. Thank you,