This is, Now, the Third Unemployment Map of the United States That I'm Posting Here 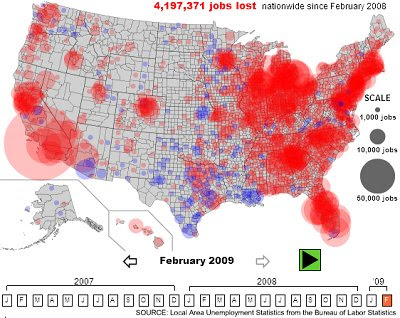 What's great about this one is that the animation really lets you see how the recession spread - first out of Michigan and the industrial Midwest (which was sort of never out of recession to begin with), then to the bubble-towns of Florida and Southern California, before invading manufacturing areas in the South and other areas on the coasts, and finally pretty much everywhere else in the country that doesn't have an energy-based economy. (I wonder how much of the relative strength of the economies in places like Louisiana, Texas, and Alaska has to do with the huge spike in oil prices during 2008.) And as employment attrition marches grimly across the land, an azure sea of hearty growth becomes, over time, stained a bloody red. The map really explodes with big red vircles in January of this year.

You can also mouse over counties to see their numbers, though the feature is a bit wonky; it seems really determined to make me see that Suffolk County, NY has lost 19,642 jobs since February 2008, but won't let me know what's gone on in New York City, about the job market of which I have more than a passing interest at the moment. Still, a very good map with a ton of information.
Posted by Chachy at 11:02 AM

From the tons of comments on your articles, I guess I am not the only one having all the enjoyment here! Keep up the good work.

I'll be subscribing to your feed and I hope you post again soon.....facts were really impressive....:)

a bit wonky; it seems really determined to make me see that Suffolk County

To my mind one and all ought to look at this.

Oh wow, this got every one going - fascinating input mixed with a good read.

I am really grateful to you for your post. It was absolutely nice piece of work.

This is an awesome blog post found here. It would be nice to have.
home treatments for hemorrhoids
easy online business
No.1 Natural Cure From Japan
Proven Natural Cure For Eyes

The job market of which I have more than a passing interest at the moment.

The third unemployment map shows the real picture of the economy of the America.It is now a hot topic of the world too.

Thanks for share the map . I need it for my class assignment . thanks again .

the unemployment rate over time at the state level. Now, in a sort of Hegelian synthesis of recession cartography, Sla

And as employment attrition marches grimly across the land, an azure sea of hearty growth becomes, over time, stained a bloody red. The map really explodes with big red vircles in January.

The unemployment level is about 40% of USA..really big

Make your own life time more simple get the home loans and everything you need.
web hosting pakistan