Depression in England and Wales

From Mark Easton, another interesting social map of the UK. This one shows the number of anti-depressant prescriptions per 1000 patients for January of this year. 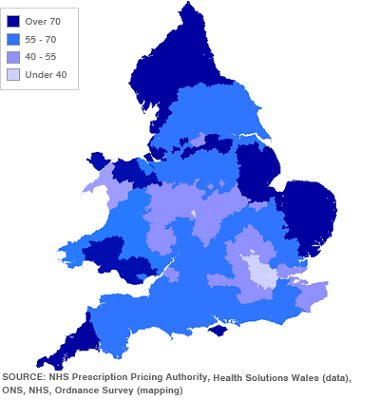 The top seven [districts for anti-depressant prescription] are all Welsh Local Health Boards (LHBs) in a small area in the south of the country. Of the top thirty prescribers, 12 are in Wales and 10 are Primary Care Trusts (PCTs) in the north-east of England.

We even see a local health authority prescribing at a rate greater than one prescription for 10 patients. In Torfaen, the area around Pontypool in south Wales, GPs handed out 104 prescriptions per 1,000 patients during January. This appears to be an astonishing level of anti-depressant use. GPs we have contacted blame a shortage of counselling for the high prescribing levels.

Those two areas have relatively high rates of unemployment. Easton also points out, though, that London, which has lots of poor folks, has some of the lowest rates of anti-depressant use; so a simple correlation to economic factors can't explain away all the trends. Beyond that: is it too trite to say that northern England is just a more depressing place to live than London? There's the bad economy, but there's also the erosion of infrastructure, the past-their-primeness of cities and institutions, and the general sense of malaise of a region whose industrial might peaked during some century other than the one we're in. If, as in my imagined picture of the place (which I have never visited), the actual north ofEngland is like the Michigan or Upstate New York of The UK, I think that maybe no great exegesis is needed to explain the region's higher anti-depressant use.

Regarding Wales, though, I don't have any overly simplistic and ignorant opinions to offer. Commenters on Easton's blog variously suggest the availability of free scrips in Wales; decrepit housing; unaffordable housing; oldness of the population; poor whiteness of the population; the social history of the region; the fecklessness of Labour politicians; Thatcher's anti-union policies; and average annual rainfall. I will go out on a limb and say: some or all of those factors may or may not be involved.
Posted by Chachy at 1:43 PM

cell phonesThis phenomenom is typified by mobile phonethe rise ofbusiness. Incredible range of products available with China Wholesale “Low Price and High Quality” not only reaches directly to their target clients worldwide but also ensures that cheap cell phones wholesale from China means margins you cannot find elsewhere and China Wholesale will skyroket your profits.
to

Howdy! This is my first visit to your blog! We are a collection of volunteers and starting a new project in a community in the same niche. Your blog provided us valuable information to work on. You have done a marvellous job!
Remixuri 2011

I hope you have a nice day! Very good article, well written and very thought out. I am looking forward to reading more of your posts in the future.