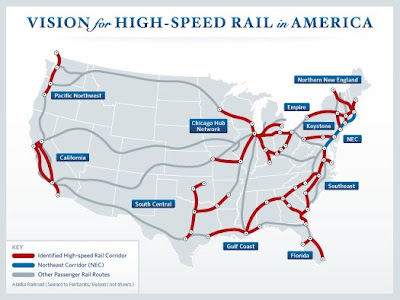 It's, um, not so different from the old one: 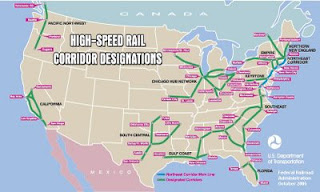 You'll note, however, that that sissy green shade on the old map has been replaced by a dynamic crimson; and, too, there are wavy ghost-lines to give a sense of integration to the plan. Change we can believe in!

But I kid. There's nothing wrong with sticking to the plan for high-speed rail that the government has nominally had since the nineties. The only problem is that it hasn't been funded. But thanks to a personal intervention by Obama, $8 billion got worked into the stimulus bill earlier this year; and his budget includes another $1 billion per annum to develop the system. Here's some of what Obama had to say about the plan on Thursday:

What we're talking about is a vision for high-speed rail in America. Imagine boarding a train in the center of a city. No racing to an airport and across a terminal, no delays, no sitting on the tarmac, no lost luggage, no taking off your shoes. (Laughter.) Imagine whisking through towns at speeds over 100 miles an hour, walking only a few steps to public transportation, and ending up just blocks from your destination. Imagine what a great project that would be to rebuild America.

In France, high-speed rail has pulled regions from isolation, ignited growth, remade quiet towns into thriving tourist destinations. In Spain, a high-speed line between Madrid and Seville is so successful that more people travel between those cities by rail than by car and airplane combined. China, where service began just two years ago, may have more miles of high-speed rail service than any other country just five years from now. And Japan, the nation that unveiled the first high-speed rail system, is already at work building the next: a line that will connect Tokyo with Osaka at speeds of over 300 miles per hour. So it's being done; it's just not being done here.

There's no reason why we can't do this. This is America. There's no reason why the future of travel should lie somewhere else beyond our borders. Building a new system of high-speed rail in America will be faster, cheaper and easier than building more freeways or adding to an already overburdened aviation system –- and everybody stands to benefit.

I just have a couple of quibbles with the plan. One: connect Pittsburgh and Cleveland! They're only 130 miles apart by freeway, a distance that could conceivably make for a reasonable commute by high-speed rail. And it's a part of the country that could definitely use the short-term economic stimulus of building the line as well as the long-term benefit of increasing economic integration. Furthermore, such a line would connect the Midwest's Chicago Hub Network with the Northeast Corridor, and then we'd have something actually approaching a continental HSR system.

Also: Houston is in Texas! Richard Florida may believe in some mythical urban mega-region on the western Gulf Coast that stretches from Pensacola to Brownsville. But I am here to tell you: Houston (not to mention Corpus Christi and Brownsville-McAllen) is far more integrated - economically, geographically, politically - with 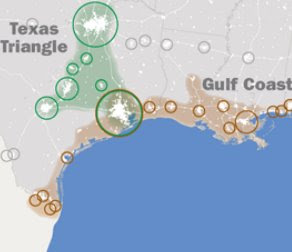 Austin and Dallas than it is with New Orleans. My car recently broke down in the town of Brenham, TX and I had occasion to get into a conversation with the local tow truck driver about patterns of megaregional integration in that part of the state (as one does with tow truck drivers). Specifically, he noted that the town had been growing in recent decades, and the reason was that people were finding they could commute from there to both Houston and Austin. I assure you there is no similarly oriented town between Houston and New Orleans. All of which is to say that - pace The Grateful Dead - Houston is not too close to New Orleans; it is close to the I-35 corridor megaregion of San Antonio-Austin-Dallas. The high-speed rail plan should reflect that reality.

UPDATE: Just saw that Cartophilia covered this as well. He's also got details and a map for the rail plan centered on Ohio. The high population densities, pre-existing infrastructure, and need for economic investment really make the Pittsbugh-Cleveland-Cincinnat-Detroit-Chicago area the best place to develop high-speed rail after the Northeast Corridor.
Posted by Chachy at 11:50 AM

I just don't want the Northwest corrider to get short shrift here. The seattle - chicago run is among amtraks most popular (if not most profitable), longest, most historic and beautiful. It has had huge ridership increases with the financial collapse and it links in to the northwest corrider running from Vancouver BC to LA - another big and important run with a developed ridership and infrastructure. With the west already pushing the envelope on many of the new transportation realities a high speed rail system here would see fast adoption rates and quickly revitalize areas that are suffering from our environmental destructions (forestry, fishing).

Admittedly, this is more anecdotal than numbers based - and no doubt selfish. But c'mon.

But there are other factors. Having decent intra-urban mass transit systems in the hub cities helps because it will make it more convenient to take rail if you can hop off of HSR and onto light rail or something. And Portland, Seattle and Vancouver are all at least decent on that score. And then the local political environment is a factor. You could well imagine the governors and legislatures of Oregon and Washington getting to together to lobby for federal funds and adding state funds for the project. That ain't gonna happen in, e.g., the South Central states of TX, OK, and AR. (Well, maybe Arkansas, which is dominated by Democrats, but Little Rock isn't exectly the lynchpin of the proposed South Central HSR system.)

well..i think...Admittedly, this is more anecdotal than numbers based - and no doubt selfish.....

It's been happening for decades.

Hi, nice post. I have been wondering about this topic,so thanks for sharing. I will certainly be subscribing to your blog.

This is really very useful and important work on U.S.A rail and others.

A high speed rail system here would see fast adoption rates and quickly revitalize areas that are suffering from our environmental destructions..

Well, I do not actually imagine it may work.

With the west already pushing the envelope on many of the new transportation realities a high speed rail system, HCG Blue Drops, the Faster and Natural way to lose weight..

a line that will connect Tokyo with Osaka at speeds of over 300 miles per hour. So it's being done; it's just not being done here.

This are great things. With high speed rail it will be a faster pleasure to travel by train

Find Hospitals in your Area said...

The positive comments and do well wishes are very motivational and greatly appreciated.
find a doctor in my area