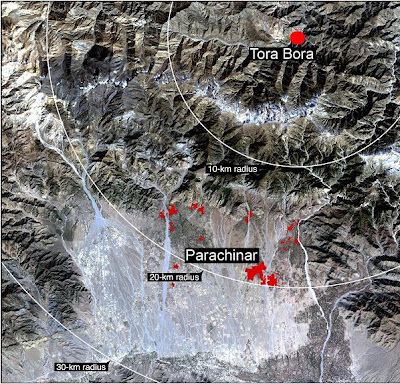 Now, admittedly, they only found him in theory - island biogeographic and distance-decay theories, in fact. John Tierney discusses it all here. The finding is described in a paper (pdf) by some UCLA geography professors. Tierney quotes the paper's explanation of the relevance of geographical theory:

Distance-decay theory states that as one goes further away from a precise location, there is an exponential decline in the turnover of species and a lower probability of finding the same composition of species. The theory of island biogeography states that large and close islands will have higher immigration rates and support more species with lower extinction rates than small isolated islands.

These theories can be applied over varying spatial scales to posit bin Laden’s current location based on his last reputed geographic location. Distance-decay theory would predict that he is closest to the point where he was last reported and, by extension, within a region that has a similar physical environment and cultural composition (that is, similar religious and political beliefs).

Basically, it's more likely for a species (or an individual) to be found close to where they were previously found, and more likely to be found in a more closely connected and regionally integrated location.

A doubt comes to mind - a thought that this biogeographic method might not be the most translatable to the situation of an internationally-wanted terrorist and political icon. After all, bird species on islands generally aren't trying to hide from NATO military forces. But the researchers argue that bin Laden needs decent access to resources, including electricity for his dialysis machine, so a town is a more likely hiding place. (It's true that a house or a barn is as good as a cave for hiding from satellites and drone aircraft.) And they expect that it would be a larger town "rather than a smaller and more isolated town where the extinction rate would be higher." They use the distance-decay model to narrow it down further: 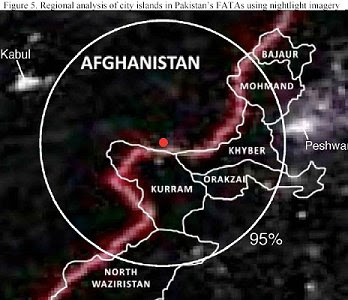 You can see Parachinar here - it's that little dab of light just south of the red dot marking the last place bin Laden was known to have been.

The geographers even go on to suggest specific buildings based on bin Laden's "life characteristics" - he's tall (needs high ceilings), needs a dialysis machine (electricity), prefers high walls (bit of an agoraphobe), needs several rooms (bodyguards), and likes shady trees (satellites, you know). The most likely candidate turns out to be: 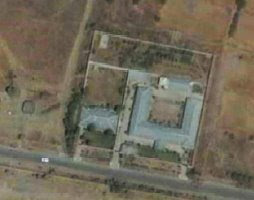 I heard this bit on NPR. My understanding was that they really needed more hard data, ie surveys of houses and characteristics that weren't available via satellite imaging. So maybe we should take all those cia agents currently trying to overthrow perfectly legal governments and have them start canvassing the area - you know, they could pose as jehovas witnesses or something, and then send their intel back to the kids at ucla.

I know - it's weird that the CIA hasn't thought to send spies into Pakistan in disguise to try to find bin Laden. I guess it just hasn't occorred to them. Well - that's government for you!

If he's an agoraphobe, wouldn't he prefer non-high walls? Or did you mean claustrophobe? And I have a feeling that CIA has probably done something like using under-cover spies, but just not trumpeted that news all over Creation. CIA takes a lot of ribbing, but they're the Three-Letter Agency I'm second-most scared of (next to IRS, of course).

G - if he were a claustrophobe, he'd hate high walls. But agoraphobe was just my too-cute-by-half way of saying that, given how many people have interests that are inversely correlated to bin Laden's existence, he's not likely to want to be visible to every passing Tom, Dick, and truck bomb.

damn that man. This country need to get it's story right and send spies over to pakstan and try to fin osama's bitch ass. it pisses me off today in 2009 when our government don't know what to do damn its obvioussend spies and helicopters to where you guys think he's hiding its not that hard. obviously you guys aren't in a hurry to finding this guy he could probably be planning something right now and you idots don't know you need to stay hot on his tails gain common sense and go to god and ask him to help you find osama bin laden ask the lord what you need o do to ind this man. the lord sees our struggle and he is waiting for us to get up and do something about this by coming to him and from there he will take it damn you people you all piss me off send me hell i'll find his ass myamn self and bring him back with interest.

Thanks so much for this post, pretty worthwhile material.