It's well known that in the middle of the 20th Century, the US went on an absolute binge of freeway construction. It's been good for commerce and the construction industry, but the unintended consequences for cities have been severe: the destruction of vibrant urban communities to make way for freeways; the inexorable spread of suburban placelessness; traffic jams; pollution. Particularly pernicious were the frequent instances of low-income or minority neighborhoods being leveled to make way for these high-speed commuter roads out to the suburbs. If you have urbanist tendencies, you probably see the freeway system as the greatest crime committed against urban design in the last century. Seen from this perspective, it's easy to look back at the 1950s and '60s as a time when the freeway builders, and their urban planning patrons such as Robert Moses, had unchecked power to will the demolition of whole neighborhoods.

But there were actually all sorts of concerted efforts to stop the bulldozers in those days; and what's more, these freeway revolts even succeeded on occasion, as discussed at Greater Greater Washington. See, for instance, this plan to thoroughly cross-hatch San Francisco with freeways. In the face of public pressure, which began as early as 1955, more than 80% of these roads never got built: 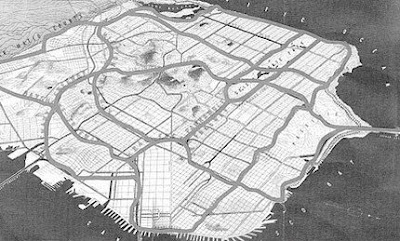 In fact, San Francisco continues to tear down what freeways it does have within its city limits; its the only major city to lose freeway miles since 1990.

There was a major plan to build an inner ring in Boston, too: 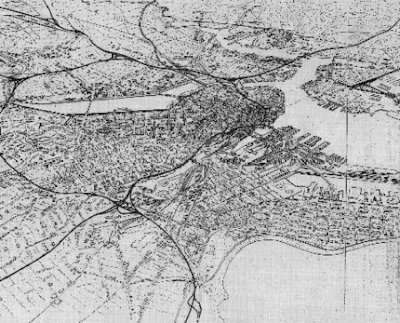 Public opposition put the kibosh on that one in the early seventies. (The only portion of the plan that was completed - the Central Artery - became a notorious eyesore, and was itself demolished in the nineties and re-built underground in a project known as the Big Dig, which project was itself an enormous debacle for all sorts of reasons. So you see that the original freeway plan set off a sort of catalytic chain of fiascos.)

Other places weren't so fortunate; in Houston, among many other cities, an inner ring was built around the central business district, coincidentally enough running right through some of the city's most historic black neighborhoods. Funny how that always seemed to happen with these freeway plans. Though even some minority neighborhoods mounted successful efforts to fight off the highwaymen, even in Houston itself, where the Harrisburg Freeway, which would have bisected the city's mostly Hispanic East End was scuttled. And the campaign in Washington, DC that spawned this announcement was also a success: 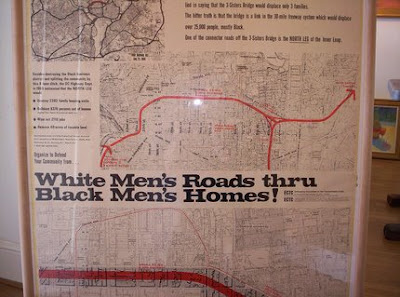 Jane Jacobs led the fight against freeways in New York, though her great urbanist screed, The Death and Life of Great American Cities,

wasn't published until 1961, and the tide didn't turn against Robert Moses & co.'s freeway plans for NYC until they had mostly been enacted. Only the finishing touches on the city's freeway sytem - the dashed lines in the map below, plus the Lower Manhattan Freeway that would have obliterated most of SoHo and the Lower East Side - were halted.

Despite Moses' success in re-building the city as a place for cars rather than people, New York is still the most thoroughgoingly urban city in North America, with the largest and arguably most successful public transit system. That is either a testament to New York's resilience in the face of efforts to re-shape it, or an indictment of the rest of America's cities for failing to provide successful urban environments for their people.

UPDATE: A commenter links to a map of Portland's thwarted freeways. The city, which had commissioned none other than Robert Moses to design its highway plan, was definitely at the vanguard of the freeway revolt movement. The author of that post makes a good point:

We’re lucky to have escaped the fate of many other cities — but I hope we are not getting ready, with the Columbia River Crossing project and all the stimulus spending in our near future, to make some of the same mistakes that we avoided forty years ago.

Also note the mostly successful movement to prevent more freeways in the city of Portland, OR. We have two major interstates as well as a looping interstate, plus a couple of expressway type limited access highways, but the plan was for so much more.
http://bikeportland.org/2009/02/16/picture-of-the-week-the-portland-that-might-have-been/

Here is Vancouver Canada we never stopped fighting, although there were some lulls the battle. Right now the Provincial Government is attempting a huge freeway building binge called the Gateway Program.

Groups such as the Livable Region Coalition, Wilderness Committee, and Grandview Woodlands Area Council are fighting back. Because of the climate crisis, we have to win this time.

From the largest city in the US & Canada without a downtown freeway - Better Transit, Not Freeways!

Seems that the whole Cascadia region is ripe for this issue. Here's to hoping that Portland-Seattle-Vancouver can get some of those high-speed-rail Obamabucks flowing their way.

We've had similar success in Sydney through the decades, especially in the most urban areas. Most of the big new road projects of my adulthood have been built underground, like in Boston. It's a win-win-win: streets remain liveable, traffic calming forces traffic underground, and since they're mostly expensive tollways, more and more people use public transit instead.

I hate to see this altered copy of the San Francisco Trafficways plan keep being republished. Here is a scan of the actual map from the 1948 Transportation Plan.

You're just anti-change you luddites. In the 19th Centuary you are the kind of people who would have opposed railways, footpaths, and bicycles. Yes there were opposition groups to these with the same rants you are making right now.

Of course you benefit from these changes but it doesn't stop you from complaining about them or whining endlessly on the Internet about what was...even though it's obvious to anyone with half a brain that the traffic situations in all of those cities would have been far worse had.

e.g. the Golden Gate Bridge and the Bay Bridge in SF. There was considerable opposition to both of these projects but I don't hear any complaints today about either. Ditto with the Brooklyn Bridge in NY. The same goes for skyscrapers, which are proven to be more environmentally beneficial than low density housing.

The list that shows the hyprocrasy being expressed here just goes on...

Wow, there is so much effective info above!

It is great site of people who can use The Map Scroll. I like it very much.Buy Twitter Followers

It is a beautiful siteVisit our HTML tutorial

Thank you.excellent post.I am really happy that this article have known to many information.

Are you out of time and require quality and Research Papers for Sale?. We offer Term Paper Help Services to scholars, and we guarantee that all scholars can afford our high-quality services and products.

It becomes necessary for students to identify companies that offer Cheap Term Paper Writers,to assist them in their assignments and Custom Dissertation Writing Help. The most convenient issue is that you can access the Custom Research Paper at any time and location as long as you have Internet connectivity.

If you are using norton antivirus and facing issue like norton not opening, then read our blog and fix it.

I am been Reading your blog for a lot time i must say its a amazing blog and i found blog to be very informative and helpful will come back to read more. Thanks for sharing!

If you are facing trouble during the Reset Ring doorbell camera, then don’t worry we will provide you proper guidance. You can contact us anytime. Our experts will interact with you and provide you all solutions regarding How To Reset Ring Doorbell.