A Map of Global Warming

A team of MIT researchers has just come out with a new projection of climate change over the course of the 21st Century. 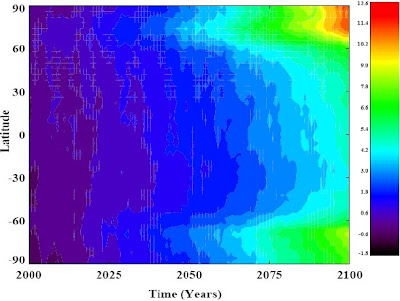 Is this a map? I guess it's both a map and a graph. Anyways, it's a little tricky to read it at first, but look at it this way: every point on the map/graph represents a particular latitude and a particular year; the color of that point represents how much warmer it's likely to be at that given place and time. So, for instance, a location at 40 degrees north latitude (e.g., New York, Madrid, Beijing) is forecast to be about 2C warmer in 2050 and about 6C warmer in 2100. No doubt lots of local effects will come into play, but these temperatures would represent the latitudinal average.

What's immediately striking is how much greater warming is forecast to be near the poles, and especially the north pole. Temperatures there could be more than 10C warmer by the end of the century, a mind-boggling number. And a special added bonus effect of a dramatically warmer acrtic is that the melting of tundra could cause even more greenhouse gases to escape into the atmosphere, instigating a vicious cycle.

The projections are warmer than those made using the same model in 2003. As the paper's abstract says:

the median surface warming in 2091 to 2100 is 5.1°C compared to 2.4°C in the earlier study. Many changes contribute to the stronger warming; among the more important ones are taking into account the cooling in the second half of the 20th century due to volcanic eruptions for input parameter estimation and a more sophisticated method for projecting GDP growth which eliminated many low emission scenarios. However, if recently published data, suggesting stronger 20th century ocean warming, are used to determine the input climate parameters, the median projected warning at the end of the 21st century is only 4.1°C. Nevertheless all our simulations have a very small probability of warming less than 2.4°C

And what would a 4-5C rise in temperature look like?

Globally, a 4C temperature rise would have a catastrophic impact.

According to the government's 2006 Stern review on the economics of climate change, between 7 million and 300 million more people would be affected by coastal flooding each year, there would be a 30-50% reduction in water availability in Southern Africa and the Mediterranean, agricultural yields would decline 15 to 35% in Africa and 20 to 50% of animal and plant species would face extinction.

That's one of the somewhat optimistic scenarios in the MIT report. And the image above depicts a middle-of-the-road model for both climate change and economic development. But there's been a tendency for observed changes in climate patterns and sea ice to push the upper bounds of what scientists have been predicting. If that continues to be the case, then a merely catastrophic outcome may be the best that we can hope for.
Posted by Chachy at 1:01 PM

Here, I do not actually consider this will have success.

Thank you for this article, pretty helpful information.