Place of the Week: Pitcairn Islands

For the second installment of what I'm still not sure whether it may or may not become a regular feature of this blog focusing on some odd or unusual corner of the globe, I give you: The Pitcairn Islands. 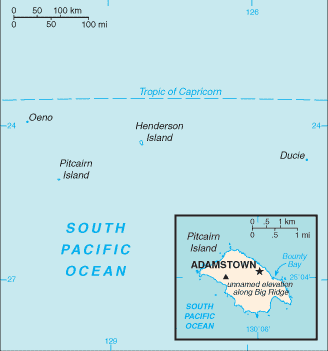 Why did no one ever tell me about the Pitcairns? The story of the Pitcairns is crazy! It's the sort of story that it seems like you ought to just inherit as part of your received knowledge of the world, like the fact that the Egyptians built the Pyramids, or that French Canadians are never to be trusted. But for me, this was not the case! I had no idea about the Pitcairns until just a couple of years ago. 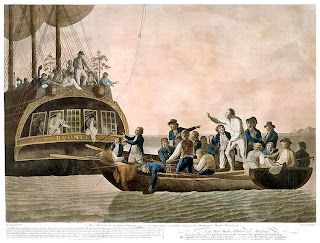 The story, roughly, is this. In 1787, a ship was sent out from England to go fetch some breadfruits from Tahiti. (Yeah, I know - but apparently that's the sort of thing people did in 1787.) After a rather longer-than-anticipated amount of time at sea - about ten months - the crew landed at the South Pacific island and, for reasons that are utterly inexplicable, found the tropical paradise quite to their liking. In particular, they appreciated the local women. (After nearly a year at sea? Again, inexplicable.) Apparently it took them about a fortnight to go native. As the Bounty's Capt. William Bligh observed, "it is therefore now not to be Wondered at ... that a Set of Sailors led by Officers and void of connections ... should be governed by such powerful inducement ... to fix themselves in the midst of plenty in the finest Island in the World where they need not labour, and where the alurements of disipation are more than equal to anything that can be conceived." In other words: they liked it there, because it was freakin Tahiti.

But so after five months they left to take their breadfruits back to England; however, apparently the prospect of returning to Spithead, the port from which they'd originally set out, didn't appeal to a large contingent of the newly tattooed and Tahitian-betrothed crew, for this is when they mutinied. After some travails involving assorted cannibals and Royal Navy courts martialers, the mutineers and a number of the Tahitian wives and buddies ended up on Pitcairn Island.

As incredible as that story is, what gets me is that they're still there. Their descendants at least - almost everyone who lives on Pitcairn today descends from those original crew. (Granted, this was after a bit of a genetic bottleneck; after some growing pangs involving racial violence, murder, the deaths of all the Tahitian men and a number of the English, and a number of accidental deaths (which increased after the local re-invention of alcohol), the male population had been whittled down to a sole survivor, along with nine women and many children, by 1800.) They didn't come into contact with anyone from the outside world again until 1808, and infrequently thereafter, from what I gather. Later in the 19th Century some missionaries showed up and turned them all into Seventh Day Adventists. But basically, the Pitcairners have just been doing their thing, maintaining their tiny civilization (and perhaps, unfortunately, cultivating a culture of sexual abuse), for the last couple hundred years. It's remarkable.

The locals speak Pitkern, an English creole tongue, which combines elements of Tahitian and 18th Century maritime English. The economy is based on subsistence farming and selling handicrafts to passing ships (which, given the distances to the nearest continents, must be about as remunerative as opening up a magazine stand in the middle of the Rub al Khali). Like 50 or so people live there today.

Seriously. It's important to know that this place exists in the world. Why did no one ever tell me about this? 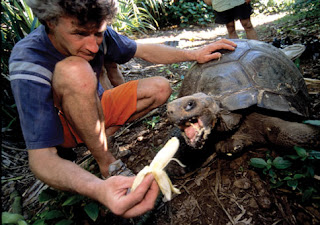 Life on Pitcairn.
Posted by Chachy at 2:15 AM

Labels: breadfruit, guy feeding a banana to a turtle, mutiny on the bounty, pitcairn islands, place of the week, south pacific

and, on a totally unrelated note, this map was the subject of a robert krulwich piece on npr this morning: http://www.npr.org/templates/story/story.php?storyId=100057939

I enjoy this nice rearrange phone search or else telephone lookup otherwise telephone number search spot. I know how to become skilled at a notable deal of reverse phone lookup substance in relation to annul cellular phone search here today when I check out this guide here.

The dude is totally right, and there is no suspicion.

Thank you for this article, quite effective data.

I should tell you that your blog articles and other content is extremely great. It truly is not simple to retain this kind of top quality in the webpage. Keep up the good work.

Wow is good to be back with my ex again, thank you Dr Ekpen for the help, I just want to let you know that is reading this post in case you are having issues with your lover and is leading to divorce and you don’t want the divorce, Dr Ekpen is the answer to your problem. Or you are already divorce and you still want him/her contact Dr Ekpen the spell caster now on (ekpentemple@gmail.com) and you will be clad you did