The Genetic Map of Europe

Speaking of genetic variation in Europe, this map by Manfred Kayser and others is fascinating. 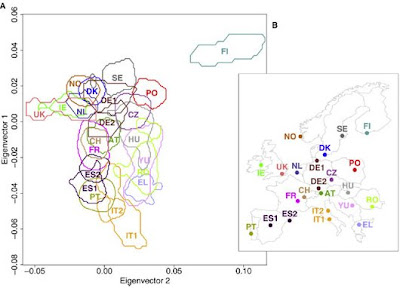 It's a bit hard to read at first. (You can click on it to see a bigger version.) The basic idea is to show the genetic relationships between 23 distinct populations across Europe, which are physically located as indicated on the right. So the more populations overlap, or the closer they are to each other, the more genetically similar they are.

The genetic map is also configured to roughly correspond to the physical relationships between the populations. One thing you can see is that they are more spread out along the top-bottom axis than along the left-right axis. That means there's greater genetic variation between north and south than there is between east and west.

The fascinating thing is how the history of Europe can be read in these patterns. From the New York Times write-up of the paper:

Europe has been colonized three times in the distant past, always from the south. Some 45,000 years ago the first modern humans entered Europe from the south. The glaciers returned around 20,000 years ago and the second colonization occurred about 17,000 years ago by people returning from southern refuges. The third invasion was that of farmers bringing the new agricultural technology from the Near East around 10,000 years ago.

It makes sense that latitudinal genetic variation would be greater than longitudinal variation. People accustomed to a certain climate - especially farmers - would be more likely to spread quickly along east-west lines, since places that have similar latitudes tend to have similar climates; people who are adapted to live at a given location are more likely to be comfortable 500 miles due east or west of that location than 500 miles due north or south. So it would take longer for populations to spread north or south, which would allow more time for genetic changes to emerge.

There are the Alps, too, of course. They run generally east-west, and serve to partially block the Italian peninsula from the rest of Europe. This relative isolation is probably why the Italian populations are among the most genetically peripheral in Europe.

And then there are the Finns. They don't even genetically overlap with other groups in the study, according the metric the authors are using - in fact, they're not even close; they're way off by themselves in the upper right-hand corner. According to the NYT, the genetic barrier between the Finns and the rest of Europe "arose because the Finnish population was at one time very small and then expanded, bearing the atypical genetics of its few founders."
Posted by Chachy at 6:49 AM

Hmm. I always thought i was so European. Half of me, though, is apparently an alien. I still got those good milk-drinking genes on the other half though

In my view every person ought to look at it.

So, I do not really imagine this is likely to have success.

It won't work in actual fact, that is exactly what I suppose.

That’s what i call “great post”. Thank you so much.