Via the excellent BLDGBLOG, here is a map of pirate incidents from around the world. 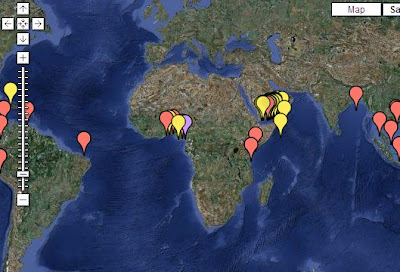 The map is published by the International Chamber of Commerce's Commercial Crime Services Agency. It shows all the piracy and armed robbery incidents reported to the International Maritime Bureau during 2009. (Reports for the last four years are also available.) You can click on the thumbtacky marker thingies to get the incident details. Details like this:

Five robbers in a wooden boat approached a bulk carrier at anchor. One of the robbers boarded the ship and attempted to steal ship's stores. Duty crew noticed the robber and informed bridge who raised the alarm, sounded ship's horn and informed ships in the vicinity via VHF Ch.16. The robber jumped overboard and escaped empty handed with his accomplices.

Armed pirates attacked a bulk carrier underway. They boarded the ship, took hostage crewmembers and hijacked it to an undisclosed location. Further details are awaited.

Pirates in an unlit high-speed boat chased a general cargo ship underway. The boat came close to the ship and attempted to board. Master raised alarm, increased speed, took evasive manoeuvres, crew switched on additional lighting and activated fire hoses. The pirates aborted the attempt due to the evasive manoeuvres taken by the ship.

The ICC's CCS's IMB reports do make for some entertaining reading. What you can sort of infer is that there are two classes of pirates: most of these scalliwags and buccaneers are sort of opportunistic or hapless - they're just engaging in glorified muggings-at-sea. And then there are the dudes working the Gulf of Aden. As you can see, this is where the lion's share of incidents have occurred. And it's the only area that's seen actual hijackings in 2009 (and it's had some really high-profile ones over the last few months, too). This situation seems to be quite different from a few years ago. In 2005, the waters off Somalia were a nettlesome area, but by far the most action was in Indonesian waters and the Strait of Malacca. Given the essentially governmentless condition of Somalia, it's not surprising that piracy has skyrocketed there. But I wonder why it has fallen so much in Southeast Asia.

For more, this report summarizes the state of piracy in the world today.
Posted by Chachy at 12:11 PM

Stumble on away starting home how to act a change telephone lookup or a telephone reverse phone lookup before even a cell phone number lookup lookup that find away who is bringing up the rear to character with the intention of has been calling you this complete moment in time ok.

Quite worthwhile information, thanks so much for the post.

The dude is completely just, and there is no suspicion.

I find it weird they can't just carry guns on the boats.

Really effective material, thanks so much for the post.