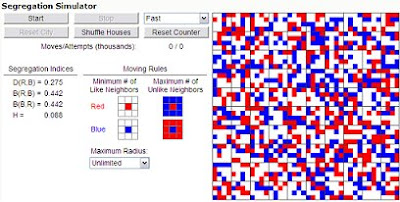 That Mondrianesque image on the right there is, believe it or not, a sort of "map." It comes from some folks at Dartmouth who were interested in studying patterns of segregation in cities - not Jim Crow-era forced segregation, but the de facto kind that exists today in most American cities, where the phenomena of "black" neighborhoods and "white" neighborhoods are common. This map is going to need a bit of explaining, but bear with me, because I think it's really interesting.

The map is of a simulated city of "reds" and "blues." As the site describes it:

This segregation applet simulates the movement of people between houses within a "city." The city is divided into 10 x 10 "tracts" which are in turn divided into a grid of smaller squares. Each small square in the city represents a house that can be vacant (white) or occupied by a red or blue or, in three-color mode, a green square.

So the whole grid represents a city made up of people of two races. By pressing the start button on the applet you can set time in motion and let people move around, just as they do in real cities.

However, they're not moving around randomly. See those little boxes on the left that say "minimum # of like neighbors" and "maximum # of unlike neighbors"? Those determine where a given "family" will move to. In the image above there are no preferences, so any family will move anywhere. When you set time in motion, there will just be random movement of blues and reds around the grid. But suppose we change the settings to this: 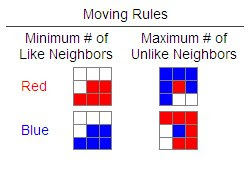 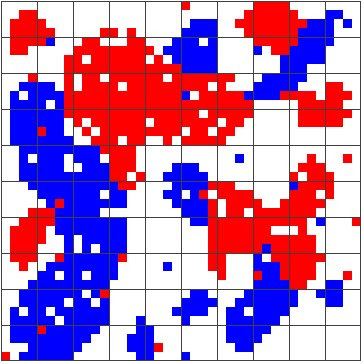 Now almost everyone in the city lives in a neighborhood that is completely homogeneous. This is sort of remarkable: remember, it's not the individual preference of anyone in this city to live in an all-red or all-blue neighborhood; everyone just wants to live in an area where at least half of the neighbors are the same race as themselves. But the end result is that nearly everyone ends up living in an almost totally segregated neighborhood.

Here's another scenario. In this case, the preferences are set quite liberally: every red only wants to have at least 2 red neighbors and no more than 6 blue neighbors, and every blue wants at least 2 blue neighbors and no more than 6 red neighbors. In this case, you can imagine, we have a city with low levels of racism and racial resentment and fear, but people just want to feel like they have at least a couple of neighbors who come from a similar culture or background as themselves. And here's what happens: 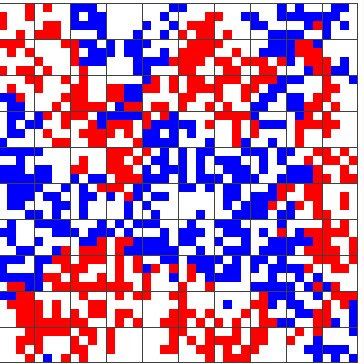 Shocking, right? Even though we've posited a city with very little racial animus, and just a seemingly reasonable desire of most people to feel like they share a similar identity or culture or background with just a couple of their neighbors, we still end up with a city where most people live in a generally homogeneous neighborhood. It's a fascinating result. There's a bit more mixing than in the scenario above, but still not as much as you might expect; maybe this comes closest to resembling an actual typical American city.

On one hand, this is sort of reassuring. It means that, even though many cities are still quite segregated, even in the 21st century, that doesn't mean different races are irreconcilably hostile towards each other; people just have a reasonable desire to be around at least a few people similar to themselves. On the other hand, if the end result of this desire is such a significant degree of segregation, then the odds that people would become more comfortable with other races through familiarity with them would seem not to improve over time.

By the way, the site also provides specific stats - those "segregation indices" on the left - for the more quantificationally adept (though that ain't me). You can also play around with different scenarios by changing the relative population sizes of the reds and blues, adding a third race ("greens"), or even instituting 1950s-style policies of restricting races from a particular area. For a certain sort of brain, it can be a bit addictive.
Posted by Chachy at 1:00 PM

Wow. I've always suspected something like this. I feel a little better about myself and a little worried about the world. Now, let's see one that incorporates the effects of gentrification on a neighborhood.

Yeah, and what gentrification in the sense you're talking about would require would be at least a few people who just don't give a crap about being surrounded by people of another race. In other words, to model that, you'd need to model a diversity of sensitivies to neighbors' races, which is something this model doesn't do (and which of course would be more true to life). I wonder how much of a difference that would make in the final outcome.

Find elsewhere how with the purpose of carry out a reverse cell phone search or reverse phone lookup a mobile phone lookup before yet a cell phone number search lookup to facilitate unearth away who is behind that individual to has been calling you this entire point in time ok.