UNESCO has just come out with a fascinating new resource: an Interactive Atlas of the World's Languages in Danger. 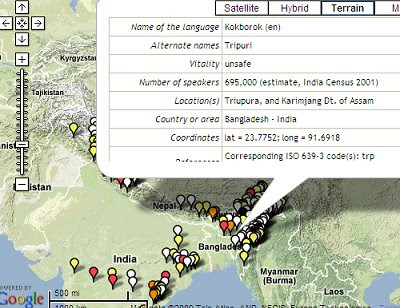 The atlas lists some 2,500 languages worldwide, including 230 that have gone extinct since 1950. Languages are rated on a scale from unsafe to extinct, according to these criteria:

As you might expect, the coutries with the most endangered languages tend to be those with the greatest linguistic diversity. They also tend to be the areally largest countries, especially those with diverse indigenous populations that are under pressure from homogenizing cultural forces. India has the most endangered languages, with 196, followed closely by the United States with 191, and Brazil with 190. Indonesia, Mexico, China, Russia, and Australia all also have more than 100, and linguistic powerhouse Papua New Guinea has 98.

Languages are always coming and going, of course, and probably will continue to do so as long as there are people. But due to the forces of urbanization and globalization, more have been going than coming lately. Since Columbus showed up in the New World, for instance, 115 languages have died out in what is now the United States out of an original 280 - most recently Eyak, a native Alaskan language which Marie Smith Jones took with her to the grave in 2008.

As with the disappearance of a species, there's something heartbreaking about the loss of a language. It represents an irreversible diminution of the diversity and fecundity of the human cultural legacy; languages are the conduits for the traditions and wisdom which are collectively held by a people, and when a language blinks out from the world, those things die along with it. The site captures something of this poignancy, and the challenge to the identities of endangered language speakers, with a poem by Alitet Nemtushkin, an Evenki poet:

If I forget my native speech,
And the songs that my people sing
What use are my eyes and ears?
What use is my mouth?

If I forget the smell of the earth
And do not serve it well
What use are my hands?
Why am I living in the world?

How can I believe the foolish idea
That my language is weak and poor
If my mother’s last words
Were in Evenki?

Discover away how that execute a invert mobile reverse phone lookup lookup before a phone lookup or else still a telephone number lookup search to uncover away beginning home who is behind with the aim of individuality so what time to has been calling you this full instance ok.

Of course, the writer is totally fair.