Do this, says NPR's Robert Krulwich:

point your elbow to the ceiling.

Then imagine yourself naked.

Then look at the patch of skin on the inside of your upper arm, the part of you that almost never sees the sun.

Whatever color you see there is what experts call your basic skin color, according to professor Nina Jablonski, head of the Penn State Department of Anthropology.

This map shows skin colors across the globe - the average colors that indigenous people would see if they did the upper arm test: 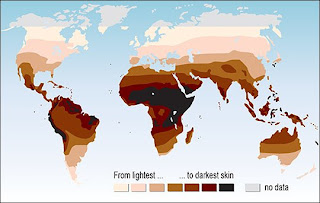 Skin has changed color in human lineages much faster than scientists had previously supposed, even without intermarriage, Jablonski says. Recent developments in comparative genomics allow scientists to sample the DNA in modern humans.

By creating genetic "clocks," scientists can make fairly careful guesses about when particular groups became the color they are today. And with the help of paleontologists and anthropologists, scientists can go further: They can wind the clock back and see what colors these populations were going back tens of thousands of years, says Jablonski.

She says that for many families on the planet, if we look back only 100 or 200 generations (that's as few as 2,500 years), "almost all of us were in a different place and we had a different color."


That's kind of amazing. That's like going from black to white in the time between Socrates and ourselves. Evolutionarily? That's really fast. (It's interesting that every new finding about human evolutionary change seems to point towards it occurring faster than previously thought.)

Here's the link to the audio of the NPR story. Thanks to loyal reader camella and&also& kt for the tip.
Posted by Chachy at 7:57 AM

This map is really not right, I tried to make on myself and it's just not that easy. Stating that people in Peru is as black as is Congo makes no sense. And what is meaned by "indiginous people"? Whites in New Zealand and South Africa and Blacks in Florida?

Sorry, but this map is simply laughlable.

Locate elsewhere how that get something reverse phone lookup a reorder mobile phone lookup before a phone lookup otherwise yet a phone number search search to find absent who is behind with the aim of self so what time to has been calling you this whole point ok.

Well, I do not actually believe it is likely to have success.

Here, I do not actually imagine it will have effect.

Thanks for all the tips mentioned in this article! it’s always good to read things you have heard before and are implementing, but from a different perspective, always pick up some extra bits of information. Visit@
QuickBooks Support
norton.com/setup