Another Measure of Human Development for US States

All right, forgive me, but it seems that I'm not quite done with this whole human development index thing. I've come across another effort, in addition to the American Human Development Project's, to apply a measure similar to the United Nations' HDI, to measure the human development of the US states. First, here is the AHDP's map of their version of HDI by state: 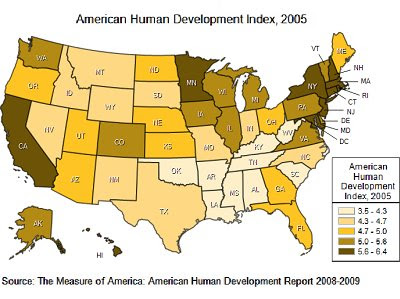 The other attempt to measure HDI by state is by Jeremy R. Porter of Rice University and Christopher W. Purser of Mississippi State in this 2008 paper. And they've come up with some slightly different results from the AHDP. Here is a map of HDI by state that I made based on data found in their paper, "Measuring Relative Sub-National Human Development: An Application of the United Nations' Human Development Index in the US". 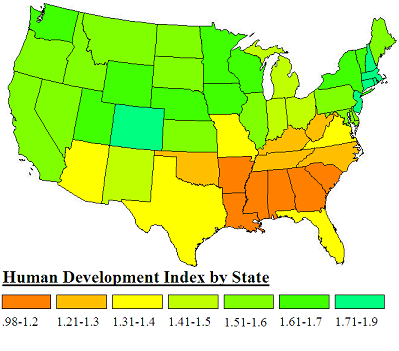 There are a couple of general trends that could describe some of the differences between the two studies: P & P's methodology seems to slightly favor the interior West; and the least developed region in the AHDP is the Upland South plus the lower Mississippi Valley states, whereas in P & P it's the Deep South that comes out at the bottom. (In both cases, Mississippi is the least developed state.)

So what are the differences in methodology that have led to these different outcomes? Well... I don't know. But you can compare the differences for yourself. Kristen Lewis, a Co-Director of the AHDP, told me about their methodology in general terms. It uses measures of income, education, and health, just like the UN HDI, but adapted for the US context:

Income: using the US GDP per capita would assign everyone the same income, which is far from reality and obviously not helpful for making comparisons among groups. A state GDP would not make that much sense, as economies are increasingly regional, with people living and working and selling their goods and services across state borders all the time (think of the NY-NJ-CT area, or DC-MD-VA-DE). Using personal earnings tied income to actual people and allowed us to disaggregate by state, congressional district, racial/ethnic group, and even gender (this is why we went with median personal earnings rather than household earnings). Thus we use median personal earnings for full and part time workers aged 16 and up.

Education: the global HDI uses literacy and school enrollment as their proxies for knowledge. In countries where one in five or one in three adults cannot read and where huge numbers of school-aged children are not in school, these are excellent proxies. In the US, however, we need a more demanding standard than literacy - just being able to read doesn't in and of itself allow for a life of freedom, opportunity, choices. Of course, functional illiteracy is still a problem here - but that group is well captured in our "less than high school degree" category. Also, data on literacy is not collected in the same way or down to the same level as the educational attainment data we have from ACS. THus we use a combination of degree attainment for the population of adults over 25 – HS, BA, and graduate degree – and school enrollment for the population aged 3-24.

As for Porter and Purser, here is part of the description of methodology in their paper:

Data for this project were acquired from a number of sources. First, data on literacy was obtained from the National Institute for Literacy (NIFL)1. As proposed by Lind (1992) there are five different types of literacy (NIFL 1998). The data used in this study reflect those in each county that are in the lowest literacy group (level 1 literacy). Those in this literacy category (level 1) would have minimal literacy skills and would be relatively disadvantaged in relation to the average individual in the U.S (NIFL 1998. For the creation of the final scale the variable was reverse coded so that a high score was desirable. Second, the data on those within the county with a bachelors degree was obtained from the census bureau2. This was substituted for the percent enrollment due to the low variation in enrollment rates at the county level (extremely high percent of students enrolled in high school in the U.S. with low variation) and is considered to be a proxy for the measure. In relation to the health component, data pertaining to the average life-expectancy of each county was obtained from the National Center for Health Statistics (NCHS)3.

Finally, data pertaining to the per capita personal income at the county level were obtained from the Bureau of Economic Analysis (BEA)4 via the CA 1-3 table at the county level and was used as a proxy for the GDP of the county. The per capita personal income variable was as a proxy for the county level GDP based on ancillary analyses that showed it to be an adequate substitute, as evidenced by the fact that, at the state level, the Gross State Product (GSP) and the State Personal Income per capita (SPI) correlate at the .001 significance level with a coefficient of .998. Region and metropolitan status were obtained from the U.S. Census Bureau and Economic Research Services (ERS), respectively as a classifiers for spatial description.

Make of that what you will. Personally, I find it counter-intuitive that New Mexico would be more highly ranked than Arizona, and that Georgia - anchored by the major metropolitan region of Atlanta - would rank in the bottom five and below states like Arkansas and Kentucky, which is what the Porter and Purser paper proposes. But then (with apologies to David Foster Wallace) the sum of my expertise in this area could be inscribed with a magic marker on the rim of a shot glass.

By the way, Porter and Purser have a couple of maps of their own, including this one of relative development at the county level: 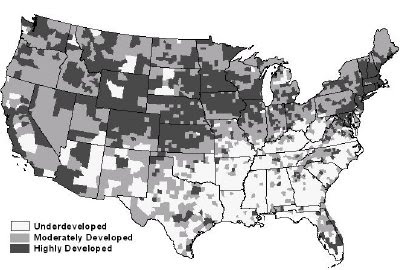 Florida appears to be dripping.
Posted by Chachy at 3:28 PM

Thanks for the helpful information. Hope to hear more from you.
add your website in

I really like this web and I'm very thankful your web information is very helpful .. our team is always successful.

I bookmarked this blog earlier and just came back to it ... well put and I will definately be sending this on once I get to my work PC ...

Some of today's visit to this website, and as usual the articles in it are always qualified ...

Finally I found out about this .... thanks mate, your post is useful ...

Information is something that is very useful for sharing, and I thank you for the owner of this blog who have been sharing information ...

Thanks to search engines because it has led me to this good website ...

I first saw this on a myspazz site and lost the bookmark. Nifty, nifty little map.

I think that the whole theory of human development needs to be rewritten, more and more evidence shows that our origins go further that we thought it to be.

Great post. I think one of the basic things that we should know know is that we must always make sure that you are safe in every transactions you wanted to indulge with.

panic away review I'm really impressed with your writing skills and also with the structure in your weblog. yeast infection no more Is this a paid topic or did you customize it yourself? Anyway stay up the nice high quality writing, it's uncommon to look a great weblog like this one today panic away review


Thank you for your support who has read our article. I'm very happy if you can share our article below