The Map Room links to The National Geographic Map Awards, which are given out to cartographers who produce maps that stand out for technical proficiency and aesthetica quality. Here's a look at the 2008 winners.

Daniel Huffman, of the University of Wisconsin, won for this map of the tallest buildings in Europe between 1895 and 2007. 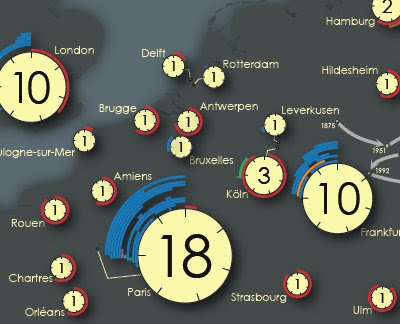 The size of the clock faces and the numbers on them indicate the number of buildings which were among the 30 tallest in Europe during the given time period. The colered rims indicate the time period and building type of the ranked buildings (e.g., red buildings were religious structures; blues were offices). You can see why it won - a ton of information simply portrayed, and a very broad implied narrative about the social and economic history of Europe over the last century and more. For instance, look at how at the beginning of the period - from "12 o'clock" to "6 o'clock" or even later, the tallest buildings are mostly religious and widespread; there's rarely more than one in any given city. By the time we get to the last few decades, the tallest buildings are almost all office buildings, and they're heavily concentrated in just a handful of cities: Paris, Frankfurt, London, and (though you need to click on the map to see it) Moscow and Istanbul.

Second place went to another UWer, Ben Coakley, for a map of small airline flights in Canada. 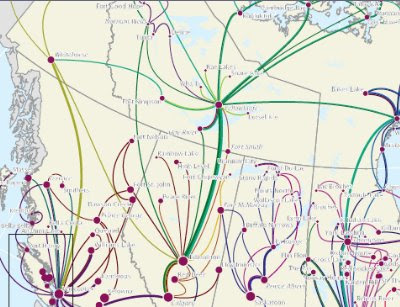 There's a certain elegant flourish to those flight paths, no?

Gregg Verutes, of San Diego State, got third place for his flash map of the slums of Accra, Ghana. 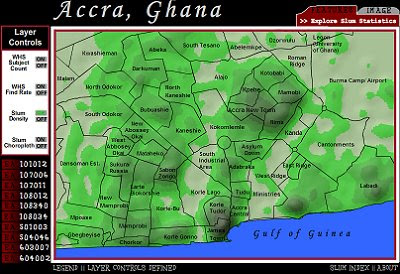 This image shows slum density. Verutes' map actually ran a bit slow for me, but then, my computer is rigged out of tin cans and AA batteries, so you might have better luck.

And as a bonus, here's a winner from 2007 - a zoomable map of armed forces sizes by Zachary Johnson, yet another U-Wisconsin mapmaker. 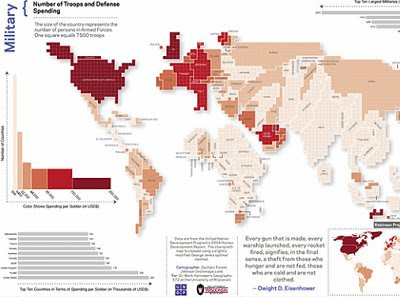 This is not to be confused with a cartogram of general military spending, which looks way different.
Posted by Chachy at 6:16 PM

I’d need to test with you here. Which is not one thing I normally do!

What namely you're saying is a terrible blunder.