Via Passport, a Foreign Policy blog, a Google Earth map showing the pile-up of cargo ships bobbing idly outside of Singapore. 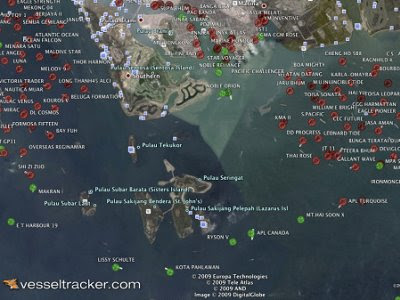 The world's busiest port for container traffic, Singapore saw its year-over-year volume drop by 19.6 percent in January 2009, followed by a 19.8 percent drop in February. As of mid-March 2009, 11.3 percent of the world's shipping capacity, sat idle, a record.

It's obviously a bad time to be a tiny city-state with few natural resources that's pretty much entirely dependent on trade for economic well-being:

The IMF projects that Singapore's economy will shrink significantly in 2009. Globally, bulk shipping rates have dropped more than 80 percent in the past year on weak demand, and orders for new shipping vessels are cratering. In Busan, South Korea, the fifth-largest port in the world, empty shipping containers are piling up faster than officials can manage.

If you want to follow cargo ships around the world in a nifty Google Earth app, go to vesseltracker.com.
Posted by Chachy at 10:16 PM

I bookmarked this blog earlier and just came back to it ... well put and I will definately be sending this on once I get to my work PC ...

Coach Outlet are now gaining a lot of popularity among the youth. The rich class that a Coach Ergo portrays is gaining a lot of attention among the younger generation. To own a Coach Hamptons Handbag is all about stating a style which is full of luxury and extravagance. Coach Luggage Handbags continue to win the hearts of lot younger and older women across the world.
Most families choose COLUMBO video tributes as a key part of funeral planning. Given the advent of the Internet and rapid growth in technology, families today have many new and innovative COLUMBO DVD COLLECTION tools available that can help significantly increase their funeral planning experience. At the top of this list are Funeral COLUMBO DVD Video Tributes, which are rapidly becoming an integral part of the funeral services offered by most Funeral Providers and Funeral Professionals.
An individual just has to wear a pair of Hogan to know the difference between Hogan scarpe donna products and other brands. The feeling is different, and Hogan scarpe uomo allows the sports person to perform better. But being too specialized presents Hogan uomo fair share of problems.

I do not believe that civilization will be wiped out in a war fought with the atomic bomb. Perhaps two-thirds of the people of the earth will be killed.

This can't truly have success, I suppose so.

Oh my god, there is really much helpful info here!

i didn't know that google can show that kind of data. but at least it is good example of how economy was