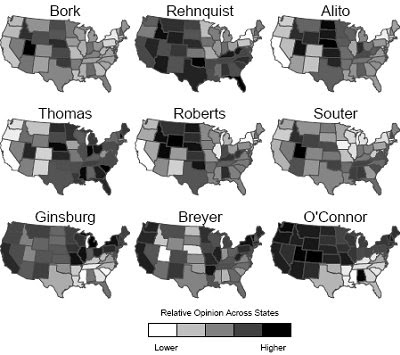 These maps show relative support, so the difference between a really popular nominee, like Sandra Day O'Connor, and a more controversial one, like Bork, don't show up. Still there are some interesting trends:

Gelman's view is that "with 59 Democratic senators and high popularity, Obama could nominate Pee Wee Herman to the Supreme Court and get him confirmed." Probably true, though knowing Obama he'll end up picking a moderate who is just conservative enough to ruffle the feathers of liberals without really making them angry, and to satisfy moderates. And I think it's fair to predict that Rush Limbaugh, and by extension 20,000,000 right wingers, will disapprove of his pick no matter who it is.
Posted by Chachy at 1:38 PM

Excellently written article, if only all bloggers offered the same content as you, the internet would be a much better place

Goodness, there is a great deal of effective data in this post!