Via Strange Maps, Thumb has this poster which overlays ring roads from around the world:

According to Thumb, "This poster is designed as a sort of calling card for Rice School of Architecture, located in Houston. We collected ring roads from 27 international cities and layered them all at the same scale. As it turned out, Houston has the largest system of those we surveyed. (Beijing was second)"

Strange Maps says that it's not entirely clear what is being referred to here as Houston's ring road. But it seems clear that the shape in the poster is that of the area contained by Highway 6 on the south and west sides of town and FM 1960 on the north side. The east side of this loop is a bit undefined, but it looks like it could be formed by Highway 146, which runs up the west side of Galveston Bay. Or maybe the east side of the "ring" is just open, represented by a notional north-south line that forms the right side of the poster.

Now, I can attest from personal experience: follow the route of this ring road and you will see nothing but the worst sorts of urban sprawl; it's truly a netherworld of placelessness, an interminable conurbation of strip malls and glass boxes which inspire the human spirit with nothing but alienation and loathing. I am sure that such is the case with most of the other US ring roads represented here. 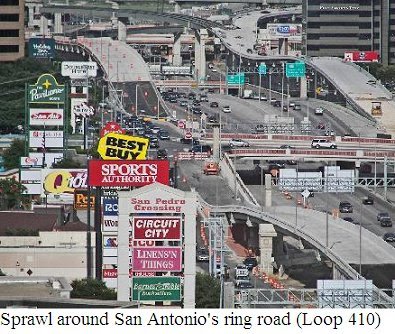 As for the rest of the cities here, I can't say much; I've only been to a few of them, and never did I make a point of touring their ring roads. Is the spawning of endless sprawl by ring roads an international phenomenon? Maybe the very concept of the ring road is anti-urban: its function is to connect peripheral areas of the metropolis to each other, rather than to the central city. In the case of smaller rings, like Vienna's or Amsterdam's, the ring might be contained within an area that is basically urban; but for the larger rings, it seems inevitable that they'd promote auto-centric lower-density development - a.k.a. sprawl.

As noted above, Beijing has the second largest ring. I'd be especially interested in knowing what the character of development there is like. One thing that I'm curious about is the extent to which China is emulating the American style of urban development. China is, after all, adding cars to its roads at a furious rate. On the other hand, it seems to be adding to its mass transit infrastructure at an equally furious rate. And the other Chinese ring roads on this poster - Guangzhou and Tianjin - aren't obscenely huge. So, my legion of Chinese readers: what's the deal with urban growth there? Is it proceeding with a sensible consideration of the needs of a healthy urban environment? Or is it sprawling in the same sort of wasteful, inane, and crude patterns as the US has been for the last 60 years?
Posted by Chachy at 5:01 PM

I am not from China, but I traveled to Beijing about a year ago. What I saw there was that all development in Beijing--including that in the most central areas--was being built in a ring road, car centric approach.

All of the construction projects were mega-projects consisting of residential, office and commercial space with at least 1/4 km footprints. These projects were separated by massive 6-10 lane cross roads which necessitated pedestrian over or under passes.

In other words, "Downtown Beijing" looks very similar to the Las Vegas strip--an unconnected string of all encompassing mega projects largely unconnected to one and other.

Yeah, I was sort of afraid of that... Well, it makes me feel better as an American to know that we aren't the only short-sighted country that's dooming the world to a future of catastrophic resource depletion and global warming.

Ring roads exist to serve automobiles, so you can imagine the rest. Beijing in particular is a shock to anyone who's been there multiple times in the past several decades. So much that made the city charming has been replaced by nowheresville with cars.

I'm disappointed to hear this described as an American phenomenon - it's not. It's the inevitable result of a human landscape conceived and executed primarily with the automobile in mind.

M - like I say, I've only experienced ring roads in the American context. It doesn't surprise me that similar patterns of development can be found in other countries, though it is disheartening.

Beijing actually has five ringroads, the sixth being completed ths year i believe. I don't know which one they depicted on this map.
Amsterdam has only one official ringroad, but the city extends beyond its circle. These 'buiten de ring'parts are either the best parts (villas, parks, the works) or the worst ('the projects').

Now, I can attest from personal experience: follow the route of this ring road and you will see nothing but the worst sorts of urban sprawl; it's truly a netherworld of placelessness, an interminable conurbation of strip malls and glass boxes which inspire the human spirit with nothing but alienation and loathing. I am sure that such is the case with most of the other US ring roads represented here.

Ohhh, so sorry. I suppose that the people of Houston will need to start cramming themselves into cute little apartment buildings that will meet your asthetic approval. Maybe they should all live in walking distance of light rail stations in high density east german Chemnitz style developments - wouldn't that be environmentally friendly?

Again, great job telling the people of Houston what they need to do to please you. This is a very important step!

It cannot have effect in actual fact, that is what I think.

Pretty worthwhile data, lots of thanks for your post.