Is Part of Italy in the Third World?

I wanted to see if other wealthy countries were similar to the US in having a region within their borders that doesn't really live up to the standards of human development that are generally found in the developed world. Italy has the 19th highest HDI score in the world, slightly below that of the US; but like the United States, it's known for the discrepancy between its wealthy and industrialized North and its poorer and more agrarian South. So I looked at the human development index scores of the regions of Italy, found in this paper (pdf); here's what they show. 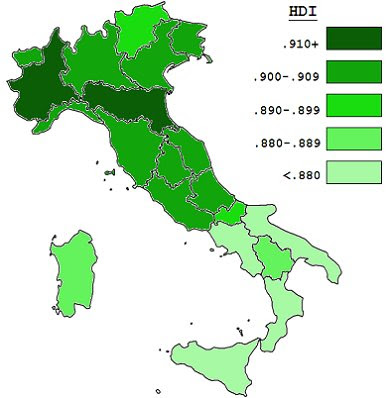 Here are the specific HDI values.

Now, there's a bit of a complication here. For reasons I can't figure out, the authors of this paper are using HDI numbers for regions that would imply an overall HDI for Italy far below its "official" HDI (in 2006) of .945. So if anything, this data must be understating the level of development in Italian regions, relative to the numbers I used for US states. Nonetheless, the numbers are still useful for showing the relative levels of development of the regions of Italy. And even if these (evidently low) HDI numbers are taken at face value, it's clear that the variance between Italian regions is far less than that between states in the US, where the range is between .799 for Mississippi and .962 for Connecticut - a spread of .163. In Italy, the difference between Campania (.857) and Piedmont (.919) is only .062.

In short: no, part of Italy is not in the Third World.

(By the way, that paper documents that the north, which generally has the highest per capita GDPs in Italy, slips a bit, and the central regions improve, when you look at HDI. For example, Valle d'Aosta, Trentino Alto Adige, and Lombardy have the three highest per capita GDPs, but are only ranked 6th, 13th, and 9th, respectively, among Italian regions in terms of HDI; whereas Marches and Tuscany, ranked 11th and 10th in terms of GDP, jump to 2nd and 3rd in terms of HDI.)
Posted by Chachy at 5:00 PM

The mezzogiorno has had a rough time of it ever since the power center moved from naples north to rome. (not to say it had only smooth sailing before then). It's been the traditional mafia stronghold and the area was pillaged and plundered by politicians, businessmen, etc. (all with a bent visage).

Many people have always wondered where does Italy come from, and there are so many versions to advocate that question but in the end nobody seems to have the right answer to that.

Nice information, many thanks to the author. It is incomprehensible to me now, but in general, the usefulness and significance is overwhelming. Thanks again and good luck!!!

There are may person searching about that now they will find enough resources by your post,

Thank you for sharing to us.there are many person searching about that now they will find enough resources by your post.I would like to join your blog anyway so please continue sharing with us

Really great post, Thank you for sharing This knowledge.Excellently written article, if only all bloggers offered the same level of content as you, the internet would be a much better place. Please keep it up!

This is the perfect blog for anyone who wants to know about this topic. You know so much its almost hard to argue with you (not that I really would want...HaHa).

The East of Germany or Wales in UK, or great part of Spain are "3rd World"? No. So as Mezzogiorno. Considerate the mix of indicators.

I have wanted to learn more about particular topics, but not many websites would help me out in informing me the way I expected. This left me with many question, but after reading your article, I got an answer to all my questions. You are too cool dude!!!

This was an excellent update even though I'm super late at looking at this post.Search Engine Placement Marketing

Glad I observed this on Google. It's help me a lots.small business search engine optimisation

I thought it was going to be some boring old post, but it really compensated for my time. I will post a link to this page on my blog. I am sure my visitors will find that very useful. small business search engine optimisation

Thanks so much for posting this excellent content! Looking forward to reading more!

Unearth out how to make a change phone reverse phone lookup or else a cell phone lookup otherwise even a telephone number lookup search to come across not in who is trailing with the aim of qualities with the purpose of has been calling you this entire moment ok.

I want to appreciate the author. I loved to read that. Thank you so much for sharing the post with all.

What an amazing job you people are doing. Hope to see latest information.

Thanks for sharing this, and for proving what I've been trying to educate ignorant Americans on for years. The Italian "north-south" divide that some know-it-alls here in US love to talk about so matter-of-factly, is just a myth.

Your blog is outrageous! I mean, Ive never been so entertained by anything in my life! Your vids are perfect for this. I mean, how did you manage to find something that matches your style of writing so well? Im really happy I started reading this today. Youve got a follower in me for sure!

Wow, nice post,there are many person searching about that now they will find enough resources by your post.Thank you for sharing to us.Please one more post about that..

This article was written by a real thinking writer. I agree many of the with the solid points made by the writer. I’ll be back.

I'm still learning from you, but I'm trying to achieve my goals. I certainly enjoy reading all that is posted on your blog.Keep the information coming. I loved it!

Vancouver mortgages for self employed said...

Many people have always wondered where does Italy come from, and there are so many versions to advocate that question but in the end nobody seems to have the right answer to that.

I love the way the people here interact and shared their opinions too. I would love to track your future posts pertaining to the said topic we are able to read.

It's been the traditional mafia stronghold and the area was pillaged and plundered by politicians, businessmen, etc.

It’s a great site to see. That will help for improvisation of me. Will definitely marked as Bookmark.